Their new album #AmarYVivir is here!

La Santa Cecilia is now so completely in command of its music, instruments and voices that these performances are flawless. The interplay between the band and La Marisoul is now on the level of sublime intuition. The visuals of the three videos released thus far are stunning and the locales are graced with not only a historic energy but also a few curious onlookers.

My favorite moment in the entire project passes by in a matter of seconds during the heartbreaker of a song “Leña de Pirul.” The camera catches an older Mexican woman off to the side watching the band and silently mouthing the words, a distinct look of nostalgia on her face, obviously lost in some distant memory sparked by lyrics that sing of the pain of a lost love.

If La Santa Cecilia can win over that lady, they will surely win you over with this magnificent album. 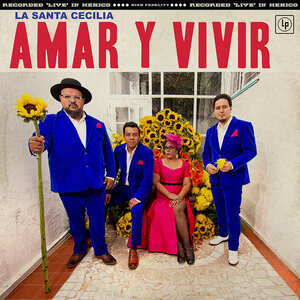