It’s a sleek modernist café and art gallery known as Tertulia Coffee and Sanchez Contemporary on Telegraph Avenue in Oakland.

Like its techie neighbors across the street, Tertulia is continuing the trend of growth in the Uptown district of the city. Unlike the newcomers, however, owners Maria and Tim Sanchez actually grew up here.

Raised in Fruitvale, Tim Sanchez says, “My family goes back a long time. My mom arrived from Puerto Rico to West Oakland in the 1950s and my dad’s family goes back in Oakland and Berkley to the 1930s.” Maria Sanchez immigrated to Redwood City in the South Bay with her family from El Salvador in the late 60s. Her mother, who was recently diagnosed with Alzheimer’s, quietly knits neon green yarn at a nearby table, surrounded by the Sanchez’s three children during our conversation. 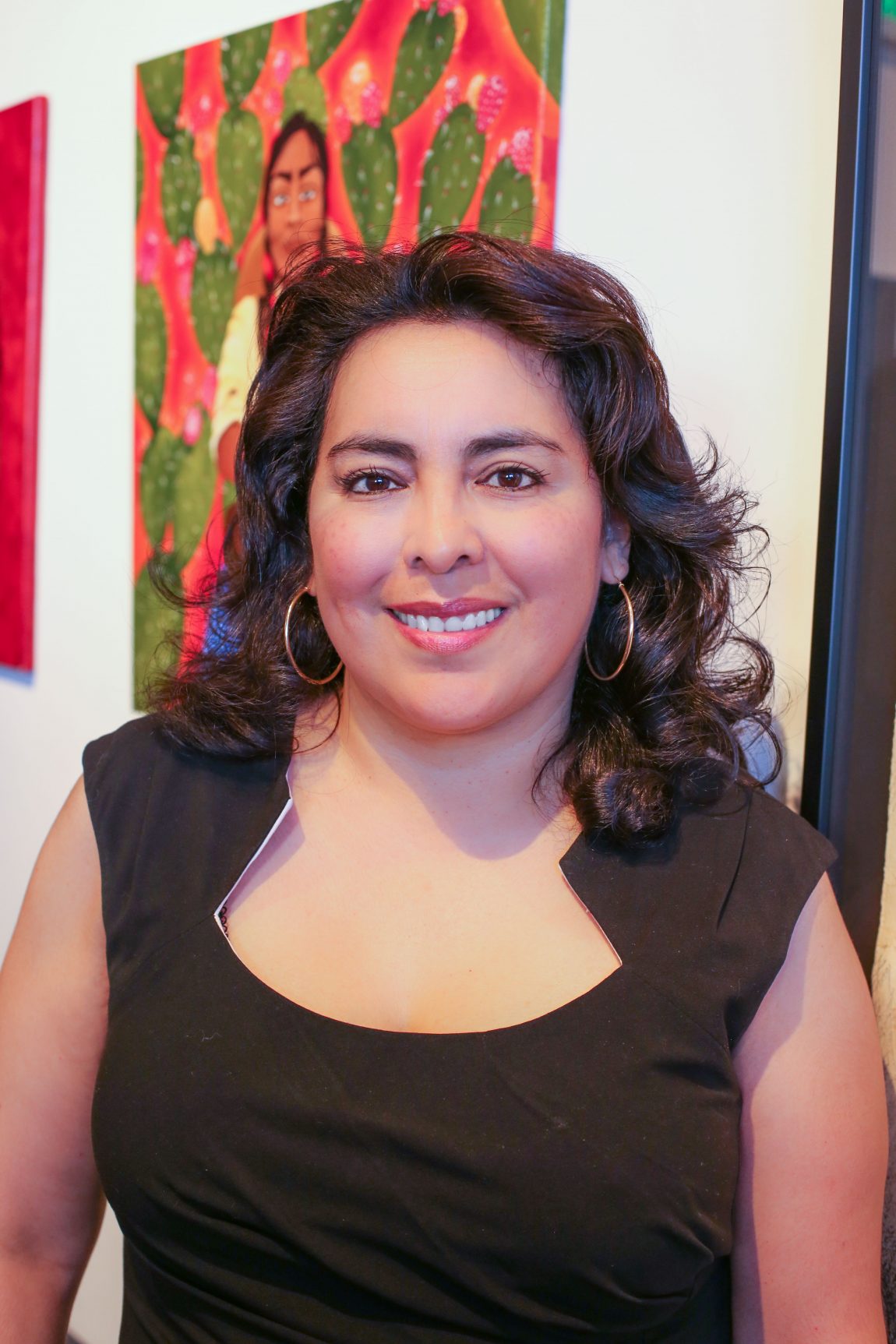 Lifelong lovers of art and coffee, it wasn’t until a few years ago that the couple (who’ve been together since they were teens) considered combining the two professionally.

“I’m a naval officer in the reserves,” says Tim. “It was [after] my deployment to Afghanistan that I came home in 2013 and it was really difficult. I was working for the New York stock exchange and when I got back I told my wife, ‘Man, life is too short. I don’t want to do this anymore.’” The result of that epiphany was Tertulia Coffee and Sanchez Contemporary. While the concept of a dual art gallery and coffee shop doesn’t seem inherently unique, the intentionality behind every show and the design of the space is.

Inside, a refrigerated case filled with raw juices and bottled cold brew await purchase near the checkout counter, with varied seating options to your right. Bags of their house-roasted beans are on display, and tucked in the back a formal gallery space with clean white walls lives ready for adornment. “A lot of coffee shops try to do art and it never works,” says Tim. “It ends up becoming a wall decoration and my view is if you’re not going to do art the right way, you’re doing it a disservice. You’re insulting the artist behind the work because nobody’s going to pay attention.” 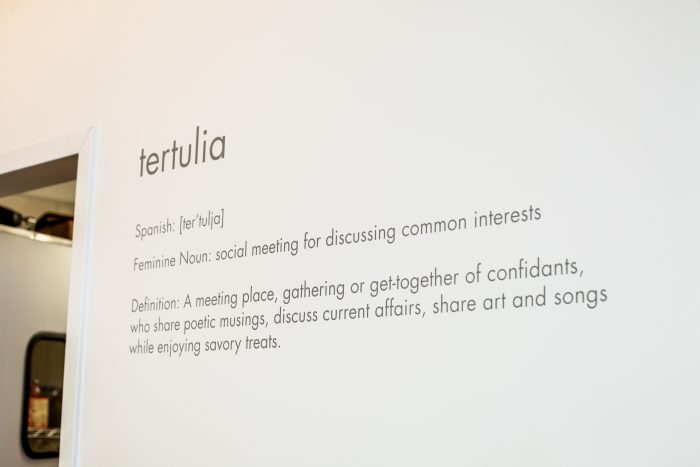 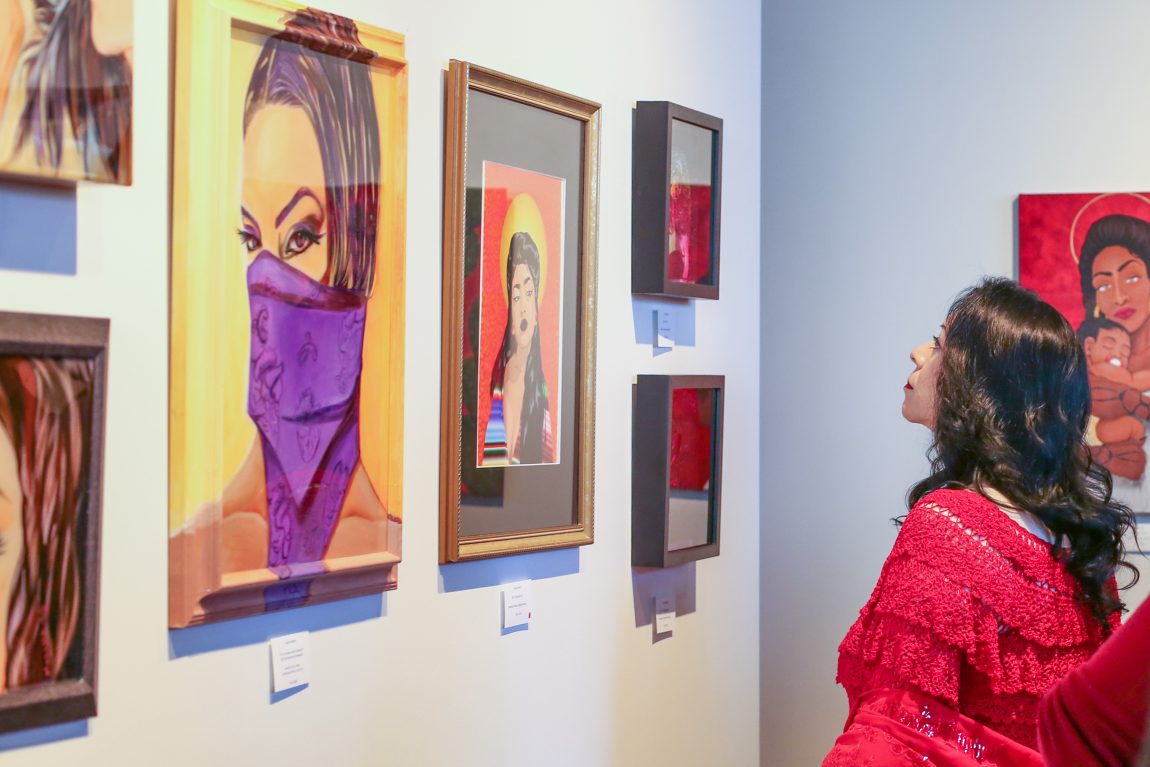 And so, the Sanchezes decided to create two distinguished zones within the airy space, separately named, to adequately showcase the rotating selections by black and Latinx artists.

Since they opened their doors last summer, Maria has curated and presented the works of nearly 100 local artists. “We like to remind people that as progressive as the art world is, it’s shut out to artists of color for lots of reasons. Not all, but an overwhelming majority are self-taught. They don’t have the degrees from the big famous art schools for the obvious reason that [they] lack access to higher education to begin with. So we decided that we were going to do our own gallery. It’s our gallery, our rules.” Tim explains.

This month, they invited Ester Hernandez, Valeria Medina, Lily Quintana, and Luis Tinoco for their newest show, Chingona rEvolution, which opened June 3 with tunes spun by vinyl collective, B-side Brujas. “They’re all artists that have subject matter where they paint [and photograph] strong women and I think it’s something that is long overdue. We don’t really see ourselves represented in fine art. So to these have images, to be able to see those images there, like how often do you see that scene in fine art? And done that well. Plus, with what’s going on with women in general in the administration and all of this ugliness that is being thrown at women, it’s like no! Women are strong.” 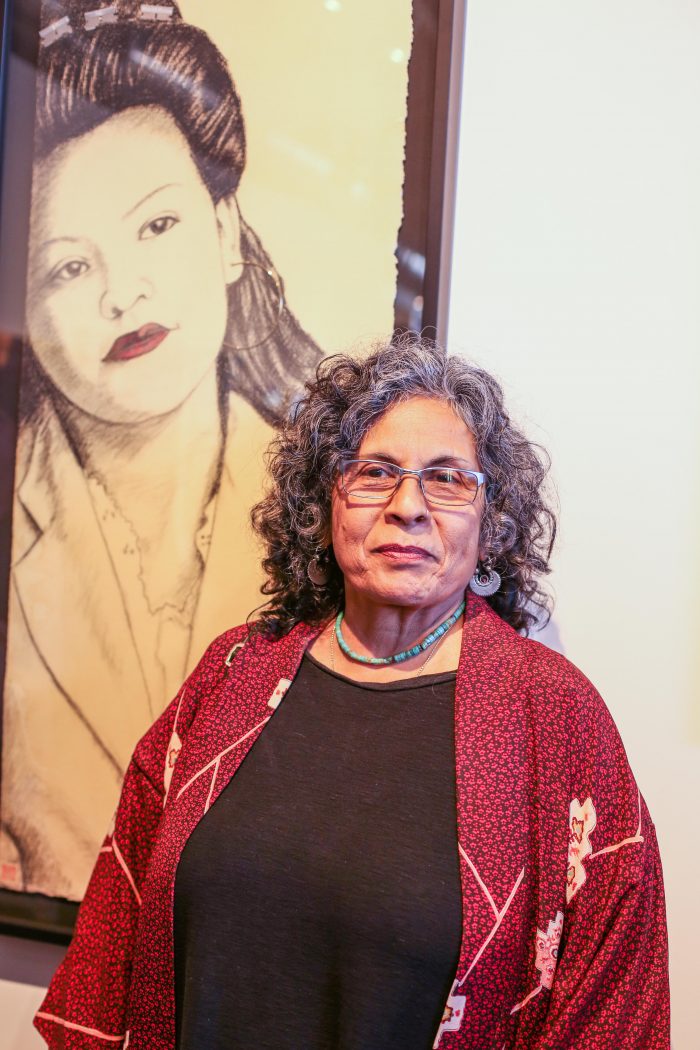 The mixture of older and newer artists is another intentional method for building community. “It’s nice to bring the older generation together with the younger generation because we’re creating these relationships and mentorships, you know,” continues Maria. “The older ones are trying to learn from the younger ones and the younger ones are learning about the history and legacy and preserving it. And so there’s this nice coming together of generations and support from the older veteranas as I call them. God mothers.”

The educational component doesn’t stop there either. “We sprinkle a little bit of salsa in what we do to appeal to a wide audience, and we’re holding our own in an area that’s changing so much, trying our best to promote and represent the women of Oakland and the Oakland experience for people of color,” says Tim of their approach. “We’re doing that with the gallery because it’s great but we get people coming in during the week—a lot of techies and hipsters that work in the area—and they’ll see Latino art or cholas hanging on the wall and they’re like…” 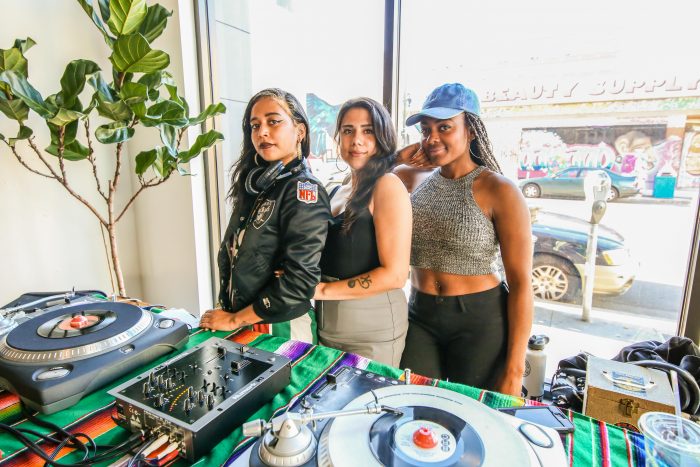 Maria interjects with a laugh, “What is a hyna? Try explaining what different chola terminologies [mean.] I had to explain to an attorney and I’m like, how do I explain this? I explained it like homegirl and he’s like, ‘Okay I get it. I want it.’ So it’s education and it’s teaching people about culture.”

On the surface Tertulia might appear to be your run-of-the-mill hip coffee post, but their rich family story is weaved into the details, says Maria. “My dad’s first job when he came to the United States from El Salvador was working for the nurseries in Woodside, California,” she pauses to point to the carefully arranged succulents on each table. “He worked for $1-2 an hour but he instilled in me how to take care of plants. So this is an honor to my dad.” 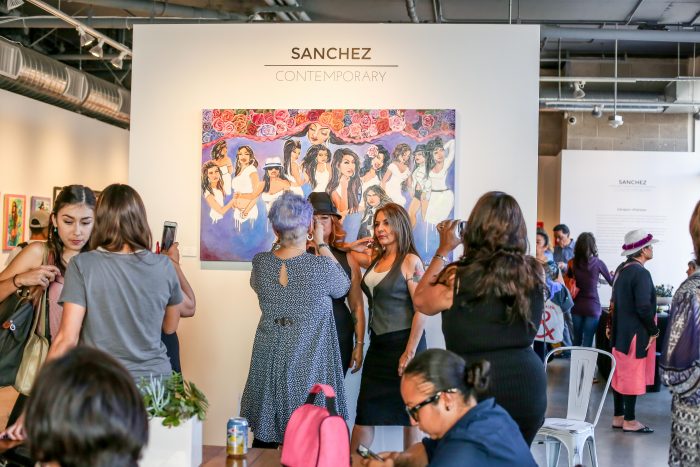 Coincidentally, Maria’s maiden name is also Sanchez so the gallery is another homage to her lineage. “I am Sanchez from birth from my dad and then [as my] married [name]. So, it’s Sanchez Sanchez. It’s to honor my dad because he didn’t live to see this, and then to also honor my husband and my family name. People see ‘Sanchez Contemporary’ and know it’s Latino. I wanted to preserve legacy for our family.”

Tim and Maria Sanchez hope the strong sense of communion extends to their customers. “In Oakland,” Tim says, “there is a big gentrification battle like in a lot of cities. But this area is ground zero for it. The demographic has changed. It isn’t the Oakland I grew up in.” But the couple explains they’re dedicated to upholding homeyness and another way they’re remaining authentic to this vision is by not having Wi-Fi. Tim explains, “We’re digging in our heels because what we want to do is create interaction—that social interaction. We want people to come unplug for an hour and just chill out, relax, put down [their] phone, and meet somebody. Bring a friend and talk. Have a conversation.” They say that this is another form of resisting the hipster cafés filled headphone-wearing techies. Maria continues, “The word tertulia, that’s what it means; coming together and having conversation – whether it’s chisme or let’s talk about a project or whatever.” 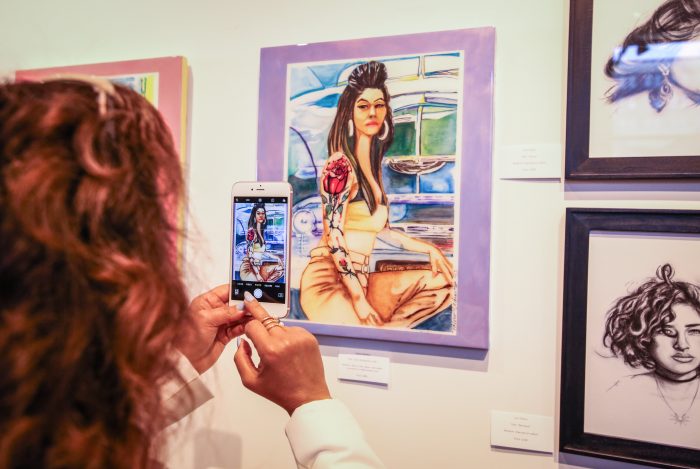 With Tim slated for a seven-month stint in Bahrain this fall and Maria still maintaining full-time work in administrative support, carefully balancing their commitments is key to ensuring they can continue their work in the community. What people don’t see, says Maria, is the struggle that has gone into making all of this happen. “It’s taken a lot to get us here. There are sacrifices that people don’t see like [selling our] house or [Tim] giving up his job. It’s all in or nothing.” Of their decision to make that jump, Tim says, “Very few are able to pursue their true passion in life and I’ve always envied people who were able to do that… And to me Afghanistan had a lot to do with that because it made me realize life is short, so do what you want to do, have fun, enjoy life, and give back when you can to the community.” 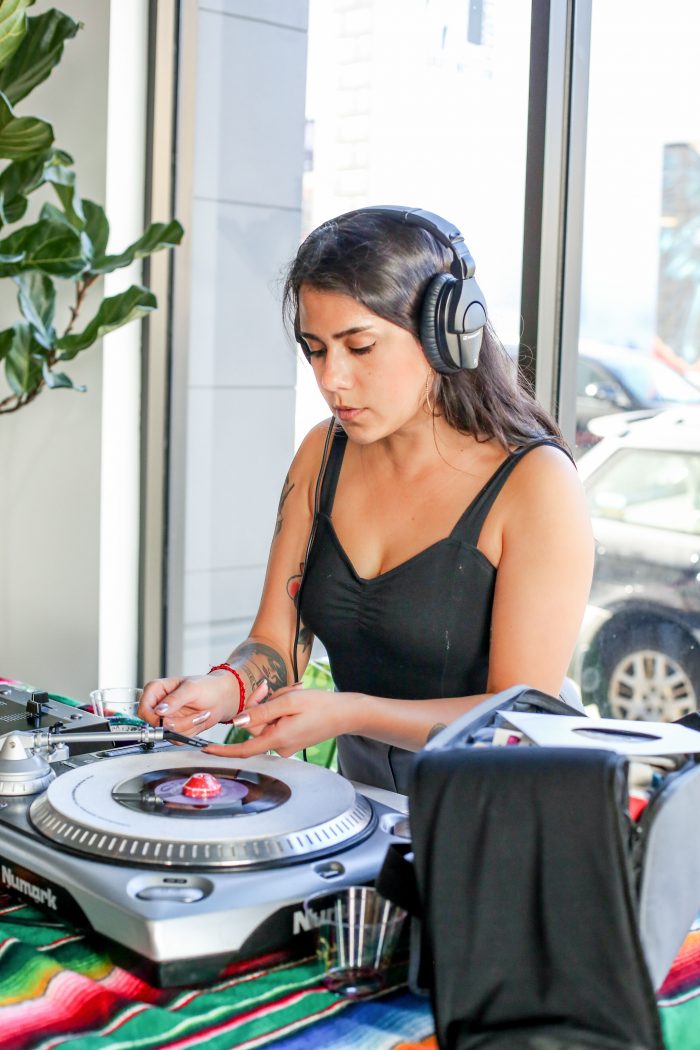 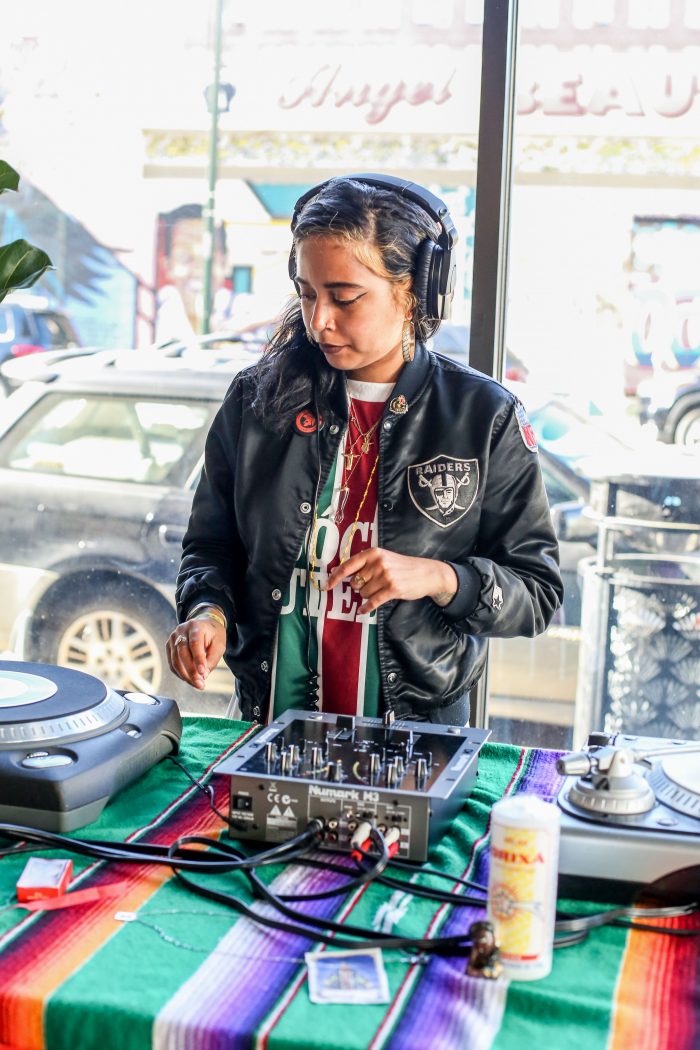 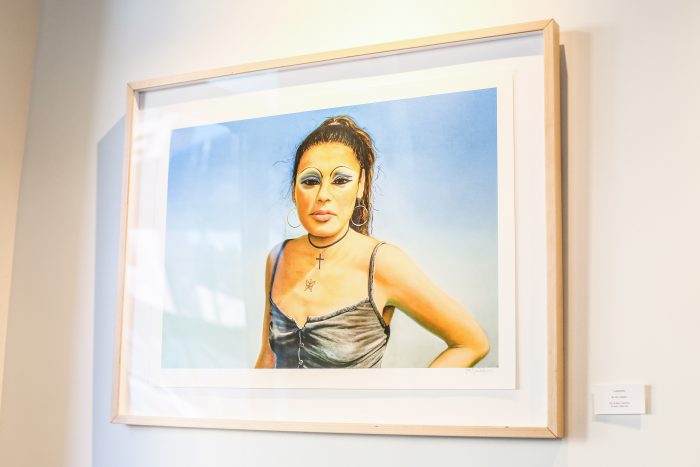 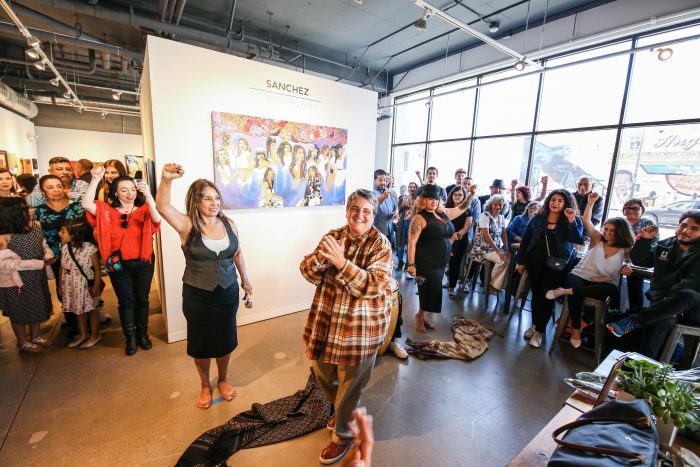 Chingona Manifesto performing at the opening of Chingona rEvolution. Photo by Cristina Isabel Rivera for Remezcla. 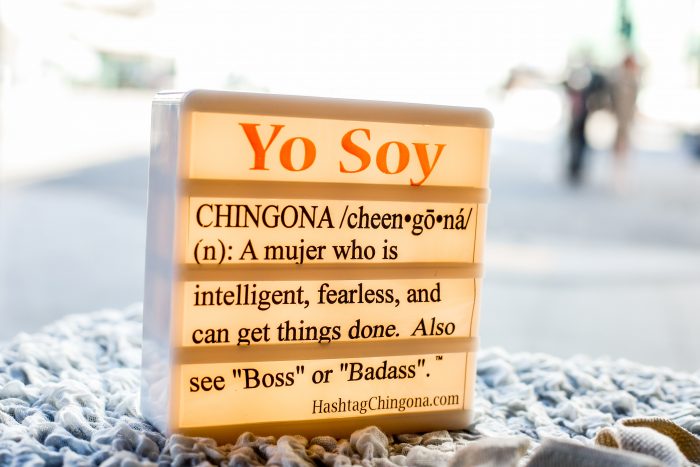 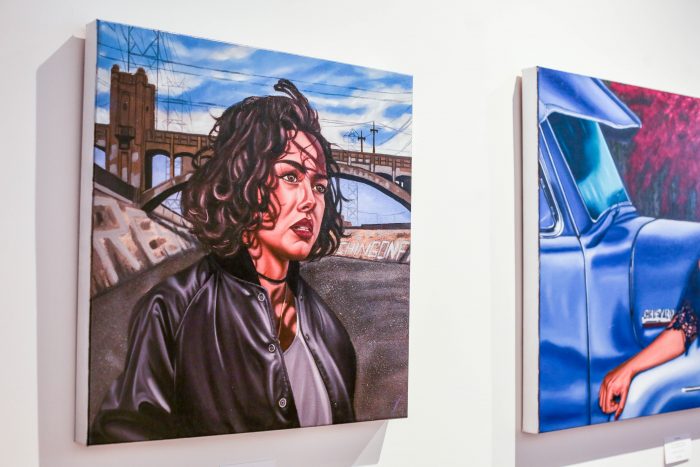 ‘My Words Are My Armor And You’re ‘Bout To Meet Your Karma’ by Luis TInoco. Photo by Cristina Isabel Rivera for Remezcla. 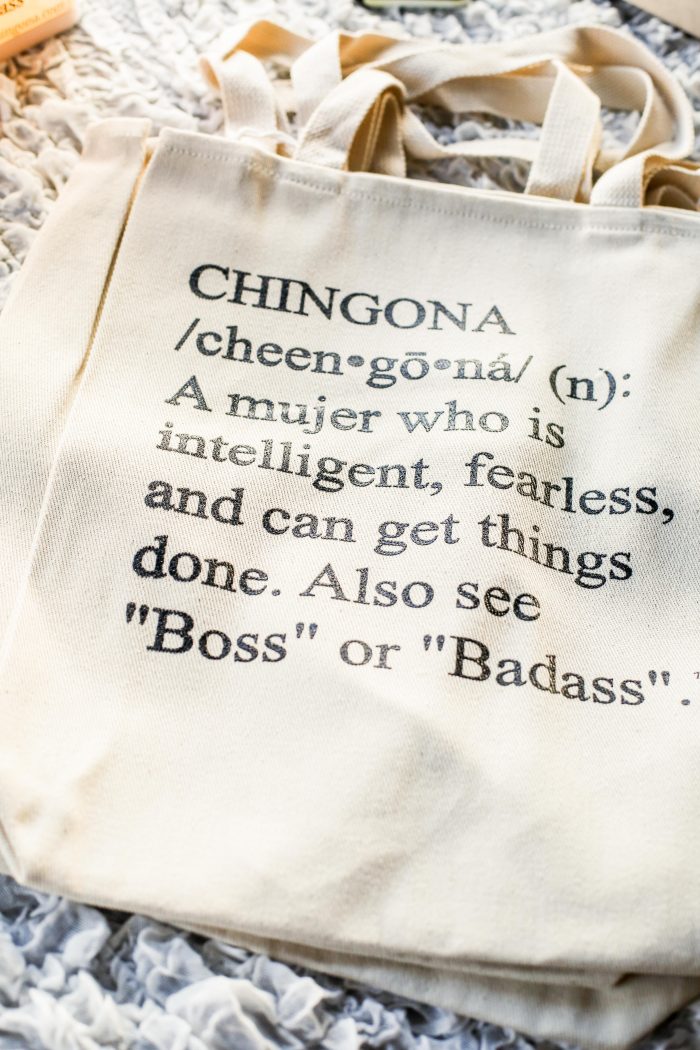