January 6th is a special day for Latino children

The date marks the culmination of the twelve days of Christmas and commemorates the three wise men who traveled from afar, bearing gifts for the infant baby Jesus.

Did you know the children (of Mexico in particular) look forward to this holiday as gifts are exchanged on this date, not on Christmas day?

1. Bigger Than Santa: In much of Latin America Día de los Reyes or Día de los Reyes Magos is celebrated in particular by children who receive gifts from the three Magi. Often, this tradition is more significant than Santa Claus: children usualluy make lists of gifts they would like.

2. Edible Wreaths: In Spain and Mexico, one of the most important elements of Día de los Reyes is the Rosca de Reyes, or the Wreath of the Kings. A large, oval-shaped cake filled with sweetened dried fruit, the Kings Cake symbolizes a crown. A small white figurine representing Baby Jesus is hidden inside the cake, commemorating the hiding of Jesus from Herod.

What is rosca de reyes?

How to eat Rosca de Reyes! 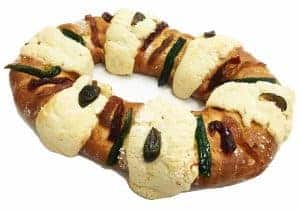 This religious meeting is usually done a few days before or after January 6 at the offices or places outside the home.

However for the family reunions they are normally held in homes on the sixth day of January in the evening, Epiphany Day or the appearance of the Wise Men or Magi Kings: Balthazar, Melchior and Caspar. 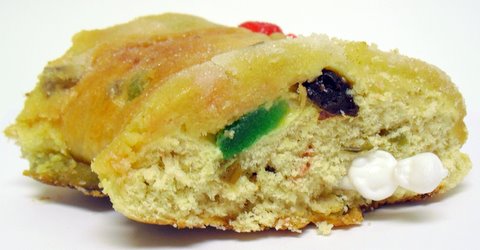 It is important when you cut a slice, that on both sides of the rosca, does not appear the figure of the infant Jesus (plastic doll symbolizing Jesus newborn).

It is worth to mention that also a small showing inside may bearly appear in the sweet bread. Now in days another figure of a Wise Men of plastic may be hidden inside the bread, so that two people who are to split the party cost. It is said that the person who finds the baby Jesus, should put the house for a party on Candlemas Day on February 2. On this day your guest are expecting to eat tamales and Mexican appetizers, so it is important to re-join the same group that was present when the rosca was cut.

Incidentally, the person who finds the plastic wise man or Magi King in his or hers slice, normally must pay the costs of the party, in reality the expenses of the party is shared by both persons. It is considered to have good luck and that you are fortunate if you find the baby Jesus and/or the Wise Man.

The tradition of holding the reunion to celebrate the Day of the Epiphany comes from the middle ages in Europe, mainly from Spain and France. This tradition came to Mexico at the time of the early years of the viceroys.