Congress passed a bill on May 21st to honor the U.S. Army’s only segregated Latino unit with the Congressional Gold Medal.

If the bill is signed into law by President Obama, the 65th Infantry Regiment of Puerto Rico, also known as the Borinqueneers, will join Puerto Rican baseball star Roberto Clemente as the only Hispanics to be awarded the highest civilian honor given by Congress.

Named after Borinquen, the Taíno name for the island of Puerto Rico, the Borinqueneers follow a number of other segregated military units that have received the medal, including the Navajo Code Talkers, Tuskegee Airmen, Montford Point Marines and Japanese-American soldiers of World War II. 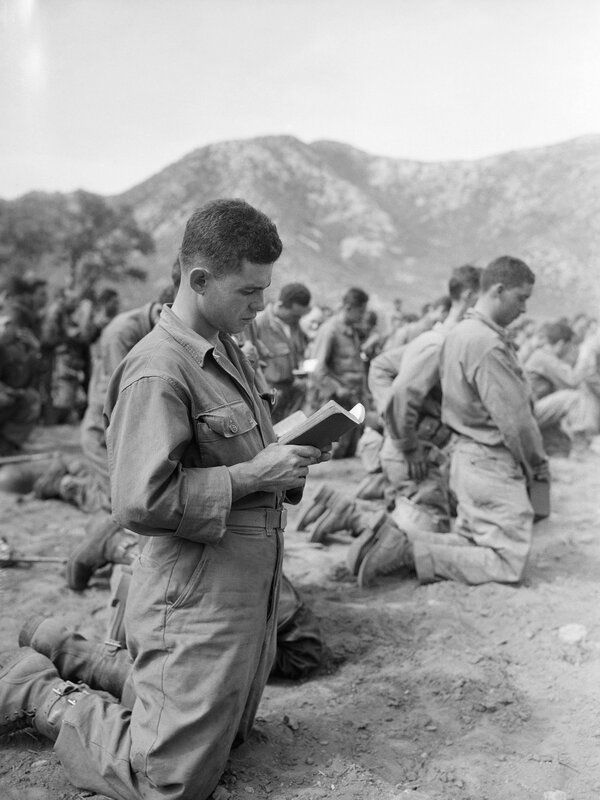 photo: Sgt. Eric Cestero kneels with other members of the 65th Infantry Regiment during a memorial Mass in honor of Borinqueneers killed in battle in Korea in 1951.

Segregation in the U.S. Army kept the 65th Infantry Regiment from fighting on the front lines during World War I.

It was on the battlefields of World War II and the Korean War where Borinqueneers like Pvt. Efrain Santiago proved their valor. Santiago’s grandson Frank Medina, an Iraq War veteran living in Orlando, Fla., says the recognition is long overdue.

“This is something that will weave the contributions of Hispanic veterans into the fabric of American culture,” says Medina, who helped lead lobbying efforts on Capitol Hill as the national chairman of the Borinqueneers Congressional Gold Medal Alliance.

Despite the discrimination the troops endured — including separate showers and orders prohibiting them from speaking Spanish — the unit made its lasting mark during the Korean War. In a letter praising the Borinqueneers, Gen. Douglas MacArthur wrote:

“The Puerto Ricans forming the ranks of the gallant 65th Infantry Division on the battlefields of Korea by valor, determination and a resolute will to victory give daily testament to their invincible loyalty to the United States and the fervor of their devotion to those immutable standards of human relations to which the Americans and the Puerto Ricans are in common dedicated. They are writing a brilliant record of achievement in battle and I am proud indeed to have them in this command.”

Some soldiers were court-martialed in Korea on charges of disobeying orders and desertion — all of which were later pardoned. (You can hear more about this history in this 2007 Weekend Edition Saturday interview with the producer of the documentary The Borinqueneers and a Korean War veteran who fought with the 65th Infantry Regiment.)

The unit was deactivated in 1956, and some members were later transferred to the Puerto Rico National Guard in 1959.

Over the years, the Borinqueneers have been honored with a plaque at Arlington National Cemetery, as well as with street names in San Juan, Puerto Rico, and the Bronx in New York City. They will be honored again in New York at the National Puerto Rican Day Parade on June 8.