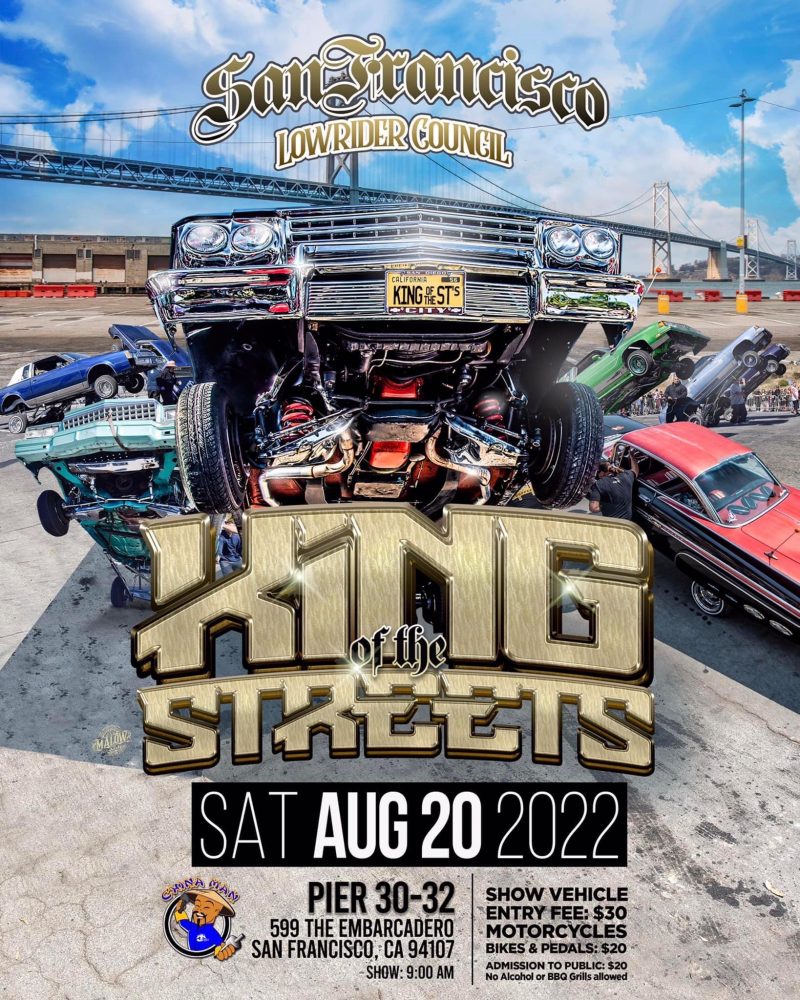 San Francisco Lowrider Council Celebrates 41st Anniversary with “King of the Streets” Lowrider Car Show and Hopping Contest at Pier 30-32 at The Embarcadero.

The historic San Francisco Lowrider Council slates a great summer day in San Francisco to celebrate culture, community and history as it celebrates “Kings of the Streets” 41th Anniversary.

“Kings of the Streets” is the backdrop for the core Lowrider Car Show & Hopping Contest along with pandemic defying enjoyment.

The public is invited to enjoy the family friendly, no alcohol allowed daylong indoor/outdoor event. No grills allowed or even needed at Pier 30-32 parking lot as the Food Vendors will roll in for festivities that begin at 9 a.m. The fun at Pier 30-32 at The Embarcadero will include Raffle, Prizes, Arts & Craft vendors. General tickets for show attendees to the event are $20, Children free.

Celebrating with a purpose, the San Francisco Lowrider Council has joined forces with local public health organizations to provide COVID testing and educational information about the growing monkeypox outbreaks. Free COVID booster shots will be available and administered by the San Francisco Latino Task Force (LTF).

This year’s “King of the Streets” event will feature food, arts and crafts vendors, lowrider swag, a DJ, and live entertainment.

The San Francisco Lowrider Council history is steeped in blood, sweat and tears as a trajectory of strong community service. Over four decades of service include but are not limited to working with the United Farm Workers, Our Mission No Eviction, Close the Camps, Free the Children, Immigration Reform, Police Reform, Black Lives Matter & Justice for Alex Nieto and more recently supporting the Mission Food Hub distribution of groceries to 9,000 families.

The 41th Anniversary “Kings of the Streets” Lowrider Show participants can still join with a $30 registration fee for cars and $20 for motorcycles. General tickets for show attendees to the event are $20.

About The San Francisco LowRider Council