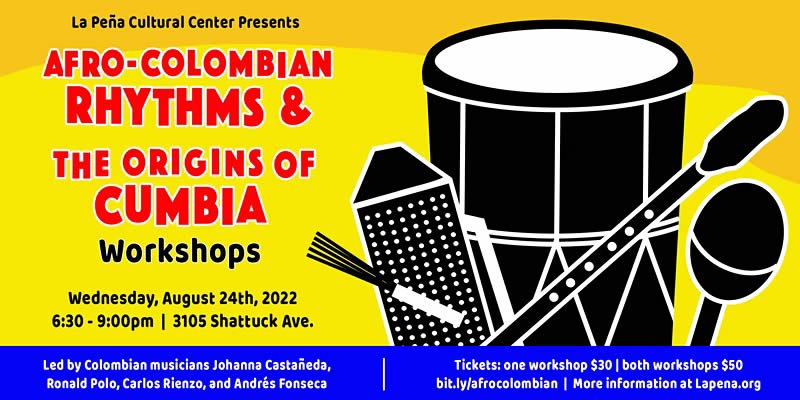 Learn about Afro-Colombian music and enjoy the depth of its history and rhythms!

We are pleased to present at La Peña “Afro-Colombian Rhythms” and “The Origins of Cumbia”, two workshops that go deep into the history, meanings, sounds, and variations of some of the most important Afro-Colombian rhythms like Cumbia, Bullerengue, Puya and Mapalé.

This is a unique opportunity to learn directly from Colombian musicians who have dedicated their lives to honoring, practicing, and preserving these fundamental musical traditions!

This workshop will focus on some of the most prominent and influential rhythms originated in the North Coast of Colombia, including Cumbia, Bullerengue, Puya and Mapalé.

We will go over the Afro-Colombian traditional instruments like the tambora, the tambor alegre, the gaita, the flauta de Millo, and more. We will review the materials that these instruments are made of and how they are traditionally crafted by hand to provide their unique sounds!

Instructors will show you the instruments and the rhythmic patterns that form these traditional sounds that have traveled the Americas since the 17th Century and that influence so many different cultures to this day. You will learn and enjoy the basic patterns to play a cumbia rhythm in the respective drums as well as the pattern of a fast tempo rhythm called Puya. Come and dive into the history and artistry of these Afro-Colombian music jewels!

Curious about the history of Cumbia and how it has become one of the most widespread rhythms of our continent? Come to this workshop and learn about where Cumbia originated, what it symbolizes, what’s the importance of its cultural background, and what are some of the many variations that it has undergone throughout time and across different countries.

In this workshop you will learn how to play Cumbia in the traditional Colombian percussion instruments! You will understand how they are made and how you tune them to get the best sound. Instructors will show you not only the instruments themselves, but also the specific rhythmic, melodic, and harmonic patterns that form the traditional sounds that we are able to recognize today.

This is a GREAT opportunity for anybody who wants to deepen their knowledge of this traditional music form that dates back to the 17th century in Colombia!

Ronald Polo is one of the most respected Colombian composer singers and musicians currently based in New York City and former member as lead singer and composer of the city’s best Colombian ensembles “Folklore Urbano”, “La cumbiamba eNeYe”, and “Grupo Chonta” among others. Polo has toured the entire globe since his teenage years in Colombia with La Corporación Cultural Barranquilla, a company in charge of representing Colombian music with their unique and traditional dances and music.

Carlos Rienzo was born in Barranquilla, Colombia in a family of musicians where playing and singing came naturally. In Colombia, Carlos was a member of several local bands where he had the opportunity to grow as a musician. He was part of many regional and national festivals across Colombia representing the Caribbean music of his region. He was able to participate in the biggest festival in Barranquilla “Festival De Orquestas” in several occasions, including one where he and his band won the prestigious award “Congo De Oro”. In 2014, Rienzo decided to move to New York to continue with his dreams. He is currently part of several recordings and cultural bands as “La Cumbiamba NeYe”, “Aires de Folklor”, “Son de Chande”, “Maraca Bruja” and “Grupo Rebolu”.

Johanna Castañeda, born in Bogotá, Colombia, grew up in a modest home full of artistic tradition. She started her career dancing at an early age by attending the Centro Cultural Llanero, a school of folkloric music in Bogotá that specialized in rhythms from the eastern Colombian plains where she was exposed to typical rhythms, songs, dances, and instruments of the region. At the Centro Cultural Llanero, she learned how to play the cuatro and began to sing. At eight years of age she enrolled in the music conservatory of Tunja, Boyaca, Colombia where she alternated her regular academic curriculum with harp, music theory and singing lessons. The next shift in her life was at age fifteen when she and her brother Edmar Castañeda, now a renowned harpist, migrated to the U.S in 1994. As a singer of many artists, Johanna was able to travel all around the world playing at many prestigious venues.

Andrés Fonseca “Drukas” is a drummer, composer, producer and educator based in Brooklyn, born and raised in Bogota, Colombia. He moved to the US with a scholarship to Berklee College of Music in Boston, MA. His talent and outstanding adaptability to play the diverse range of music he’s surrounded by, has gotten him to perform at major music venues across the US including the Lincoln Center, the Kennedy Center, the Apollo Theater, and Carnegie Hall, amongst others. You can find him playing with several music and artistic projects in NYC from traditional afro-Colombian music to modern contemporary jazz, as an accompanist for dance ensembles to playing Disco Psychedelic Cumbia.

COVID-19 POLICY: Please note that we will require ID & Proof of Full Vaccination at the door. Booster shots and the use of masks inside will be encouraged but are NOT mandatory. See our most updated Covid-19 Policy here. 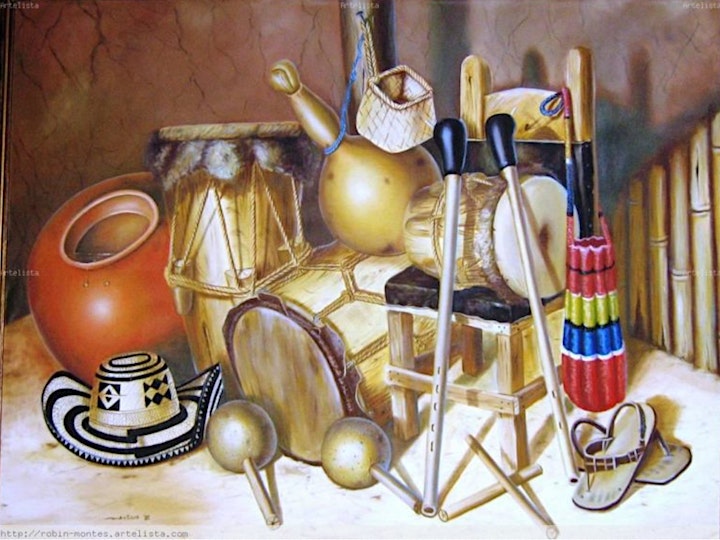