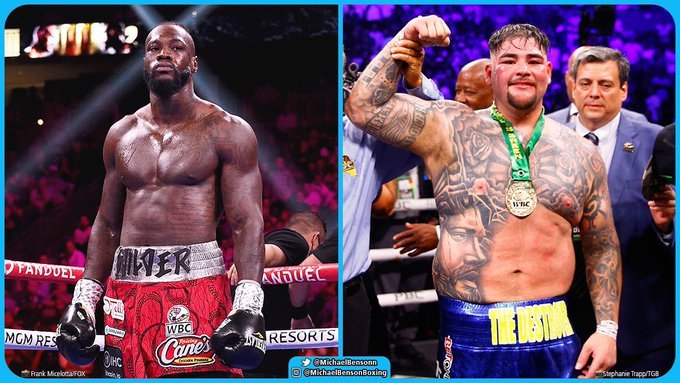 Deontay Wilder vs Andy Ruiz Jr. is the next confirmed heavyweight title eliminator, the World Boxing Council has confirmed.

Eddie Hearn, president of Matchroom Boxing, revealed that Andy Ruiz and Deontay Wilderare going to to fight in 2023.

“It looks like he’s going to fight Andy Ruiz, he’s in negotiations with different people to fight him,” the promoter commented in an interview with iFL TV.

“So I think that’s what he’s going to do next. If not, we want Deontay Wilder to fight for an interim with Dillian Whyte or AJ (Anthony Joshua) in the summer. We’ll have to see.

The winner will face Tyson Fury.

The fight between the two fighters is part of the ruling issued by the WBC early last month, when it noted that there should be an elimination fight between Ruiz and Wilder, and the winner will be the mandatory challenger to Tyson Fury, that body’s heavyweight champion.

In any case, in recent weeks Wilder’s interest in facing Anthony Joshua has been strong, because when both were champions, they were never able to unify the belts.

Ruiz defeated Luis Ortiz by unanimous decision in his only fight of 2022. [See video at the bottom].

Thus, the Mexican-American fighter will also seek to become WBC champion, a belt he has not been able to win.

At this moment there is a possibility that Wilder will face Tyson again, because if he beats Ruiz he will be the mandatory challenger. Fury is in final negotiations for a unification fight against Oleksandr Usyk, which would also take place in early 2023, with no definite date yet.