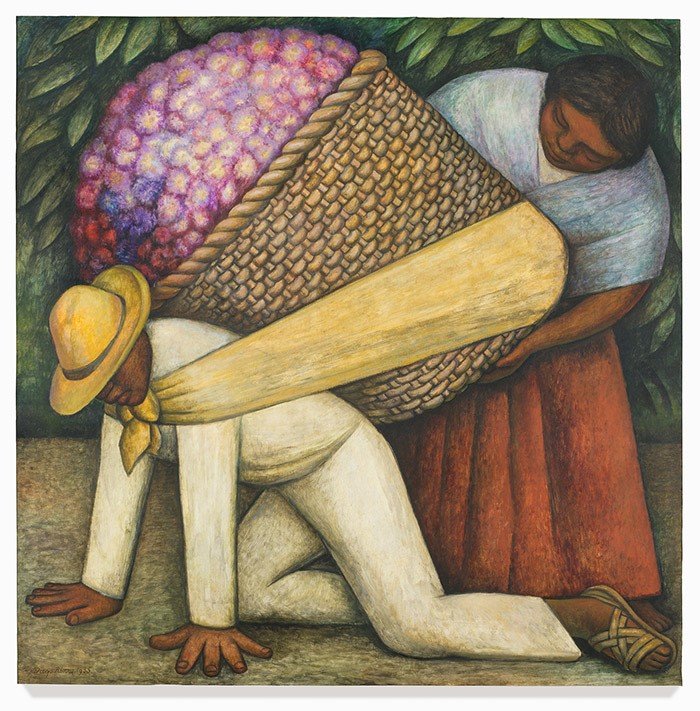 Diego Rivera’s America Brings Together 150 Artworks from Pinnacle of the Artist’s Career!

His Vision of Mexico and the United States Comes to Life in Paintings, Drawings, Murals and Projections. 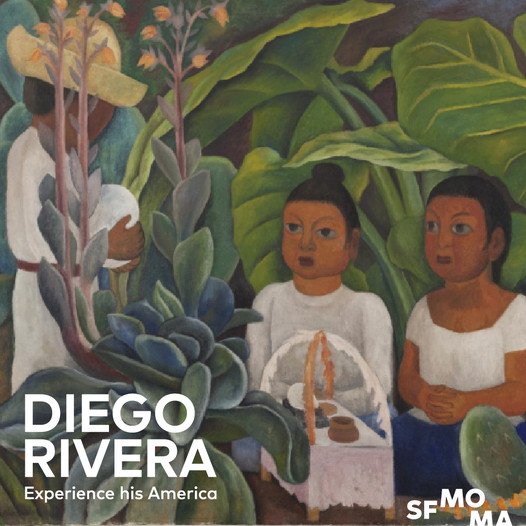 Celebrate the opening of Diego Rivera’s America with a FREE day of revelry, activism, community, and art.

All day long, visit the museum galleries for free and experience the vibrant creativity of San Francisco’s Mission District with music and dance performances curated by Accíon Latina; a mercado featuring crafts by local artisans; a lowrider display; a digital mural installation by Lauren Rose D’Amato and Derek Holguin; a community screening and dialogue around Moving a Masterpiece, the Emmy-award-winning documentary about Diego Rivera’s Pan American Unity, co-produced by SFMOMA and NBC; and of course, the public’s first peek at Diego Rivera’s America! 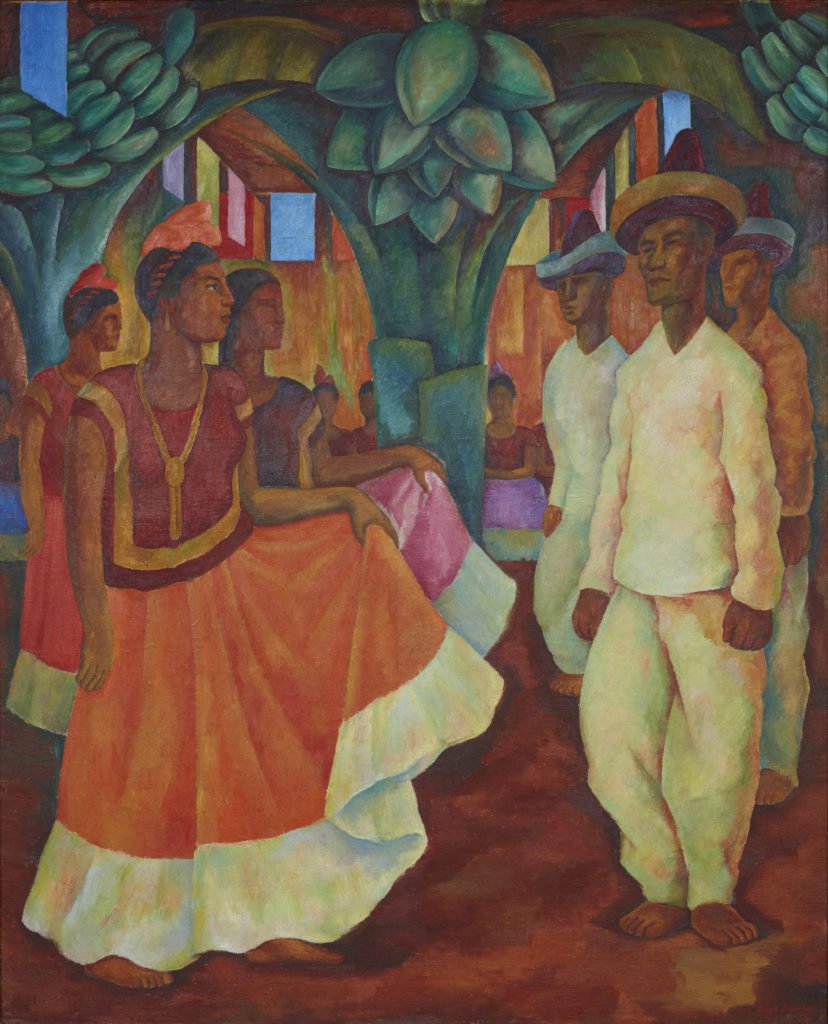 The San Francisco Museum of Modern Art (SFMOMA) announces Diego Rivera’s America, the most in-depth examination of the artist’s work in over two decades.

Diego Rivera’s America brings together more than 150 of Rivera’s paintings, frescos and drawings—as well as three galleries devoted to large-scale film projections of highly influential murals he created in Mexico and the U.S.

On view from July 16, 2022–January 2, 2023, the exhibition focuses on his work from the 1920s to the mid-1940s, the richest years of Rivera’s prolific career. During these two key decades, Rivera created a new vision for North America, informed by his travels in Mexico and the United States.

“Rivera was one of the most aesthetically, socially and politically ambitious artists of the 20th century,” notes guest curator James Oles. “He was deeply concerned with transforming society and shaping identity—Mexican identity, of course, but also American identity, in the broadest sense of the term. Because of his utopian belief in the power of art to change the world, Rivera is an essential artist to explore anew today, from a contemporary perspective.”

Diego Rivera’s America builds on SFMOMA’s collection of over 70 works by Rivera, one of the largest in the world.

It also features paintings, drawings and frescos borrowed from public and private collections in Mexico, the U.S. and the U.K., reuniting many for the first time since the artist’s death. Iconic and much-loved works, such as The Corn Grinder (1926), Dance in Tehuantepec (1928), Flower Carrier (1935) and Portrait of Lupe Marin (1938), will be shown alongside paintings that have not been seen publicly since leaving the artist’s studio.

The exhibition is the first to examine Rivera’s work thematically, with galleries dedicated to places like Tehuantepec and Manhattan that captured his imagination, and to his favorite subjects, such as street markets, popular celebrations and images of industry. It begins with Rivera’s first mural commission, Creation (1922–23), a project that—like much of his work—looks to past artistic traditions while also embracing avant-garde strategies. In the 1920s, working mainly in Mexico, Rivera established his mature style, distinguished by rounded forms, intense colors, and increasingly dense compositions. He cemented an interest in allegory, popular culture, family, labor, and the proletarian revolution, themes that would be central to his famous murals in San Francisco, Detroit and New York of the early 1930s, and that would resonate in his paintings and drawings through the 1940s.

The culmination of the exhibition is Rivera’s last U.S. mural, a colossal work measuring 22 feet high by 74 feet wide, painted for the Golden Gate International Exposition in San Francisco in 1940. The Marriage of the Artistic Expression of the North and of the South on the Continent—commonly known as Pan American Unity—is free to all visitors to view in SFMOMA’s Roberts Family Gallery. This 10-panel portable fresco, on loan from City College of San Francisco until 2024, explores his vision of a shared history and future for Mexico and the U.S.

Diego Rivera (Mexican, 1886–1957) believed in the power of art to educate, inspire action and transform society. He considered art an essential weapon in the utopian struggle for greater social equality and justice. Paintings such as The Tortilla Maker (1926) and Weaving (1936) illuminate Rivera’s desire to focus on everyday people as the protagonists of national narratives. From the early 1920s to the mid-1940s, he reimagined Mexican national identity on a vast scale, embraced the industrial age in the U.S. and conceived of a greater America in which unity, rather than division, was paramount.

Rivera’s idea of “America” was hemispheric and transnational, and did not refer only to the United States, as he stated in 1931: “I mean by America, the territory included between the two ice barriers of the two poles. A fig for your barriers of wire and frontier guards.” Above all he believed that the U.S. and Mexico shared a similar historical foundation in which a rich Indigenous past had been suppressed by colonial violence. He also believed the countries shared a creative force and revolutionary impulse that distinguished them from Europe. Diego Rivera’s America invites audiences to reflect on the shared histories and challenges that connect us across political borders.

The exhibition proposes new interpretations of some of Rivera’s most famous paintings, including Flower Seller (1926), on loan from the Honolulu Museum of Art, and a 1938 surrealist landscape from the collection of the Brooklyn Museum of Art. A suite of his humorous designs for the modernist ballet H.P. (Horsepower), on loan from The Museum of Modern Art, New York, will be presented together along with the first recreations of Rivera’s costumes since 1932. The presentation also unveils paintings lost to scholars or never exhibited before, among them a stunning double portrait commissioned by the mother of Jane and Peter Fonda in 1941.

The galleries devoted to Rivera’s U.S. murals feature large-scale preliminary sketches and cartoons for works such as his censored Rockefeller Center project of 1933, as well as two fresco panels painted in New York. His timely invitation to return to San Francisco in 1940 to paint a large mural in front of a live audience at the worlds’ fair held on Treasure Island allowed him the ideal opportunity to envision a collective American response to a world collapsing again into war.

San Francisco was particularly important to Rivera; it was the first place he painted murals in the U.S. Likewise, his work was deeply influential to artists and muralists across the Bay Area. Through their work, Rivera and his wife Frida Kahlo became deeply connected to local cultural figures. San Francisco was also where Rivera and Kahlo remarried in 1940, after their brief divorce. The exhibition will present portraits of their wide circle of friends in San Francisco, including three important paintings by Frida Kahlo.

Diego Rivera’s America features two galleries dedicated to Rivera’s San Francisco projects, with preparatory drawings for two murals from 1930–31: Allegory of California and The Making of a Fresco Showing the Building of a City. The exhibition will also incorporate Rivera’s portable fresco Still Life and Blossoming Almond Trees (1931), originally painted for a private home and now in the collection of the University of California, Berkeley. Brought together for the first time, these works provide unparalleled insight into Rivera’s time in San Francisco and highlight the artist’s role in helping to establish a legacy of politically engaged muralism that remains an indelible part of the city’s identity and built environment.

Diego Rivera’s America spotlights paintings that depict life in Mexico and in the U.S. and concludes with a vast fresco that unites both countries. Rivera’s work invites us to consider the past while also asserting the power of art to envision solutions to cultural, economic and political challenges and shape the present.

Diego Rivera’s America is accompanied by a richly illustrated catalogue that serves as a guide to two crucial decades when Rivera was at the peak of his international fame. Essays by leading experts on Rivera and modern Mexican art devote attention to iconic paintings as well as works that will be new even to scholars—revealing fresh insights into his artistic process. The book features more than 300 illustrations, with essays by James Oles, Maria Castro, Claire F. Fox, John Lear and Sandra Zetina, and contributions by Michelle Barger and Kiernan Graves, Dafne Cruz Porchini, Jennifer A. González, Rachel Kaplan and Adriana Zavala. The catalogue is edited by James Oles and published by the San Francisco Museum of Modern Art in association with University of California Press.

In tandem with Diego Rivera’s America, SFMOMA has produced The Mission Muralismo Audio Zine Vol.I, for listeners to take audio stroll through San Francisco’s Mission District, learning about the murals seen throughout the neighborhood and the artists who collaborated to create them. In this 48-minute audio story narrated by Camilo Garzón, local writers Olivia Peña and Josiah Luis Alderete interweave their perspectives on the history of the Mission Muralismo movement with stories from the muralists themselves.

The special exhibition Diego Rivera’s America has an additional surcharge for all visitors 19 years and over: $10 weekdays, $12 weekends and holidays (prices subject to change). Guests who purchase their tickets online in advance will receive a $2 discount.

General Admission and special exhibitions for all visitors 18 years and younger is free.

On Free Family Days, general admission to the museum is free for up to four adults accompanying one child or teen (18 and younger).

For City College of San Francisco students, staff and faculty, admission to Diego Rivera’s America is free with CCSF ID.

Participants in “Discover & Go” and “San Francisco Museums for All” programs receive free admission with no surcharge.

Note: Special exhibition tickets will need to be reserved on-site and will be available first come, first served, depending on gallery capacity and ticket availability.