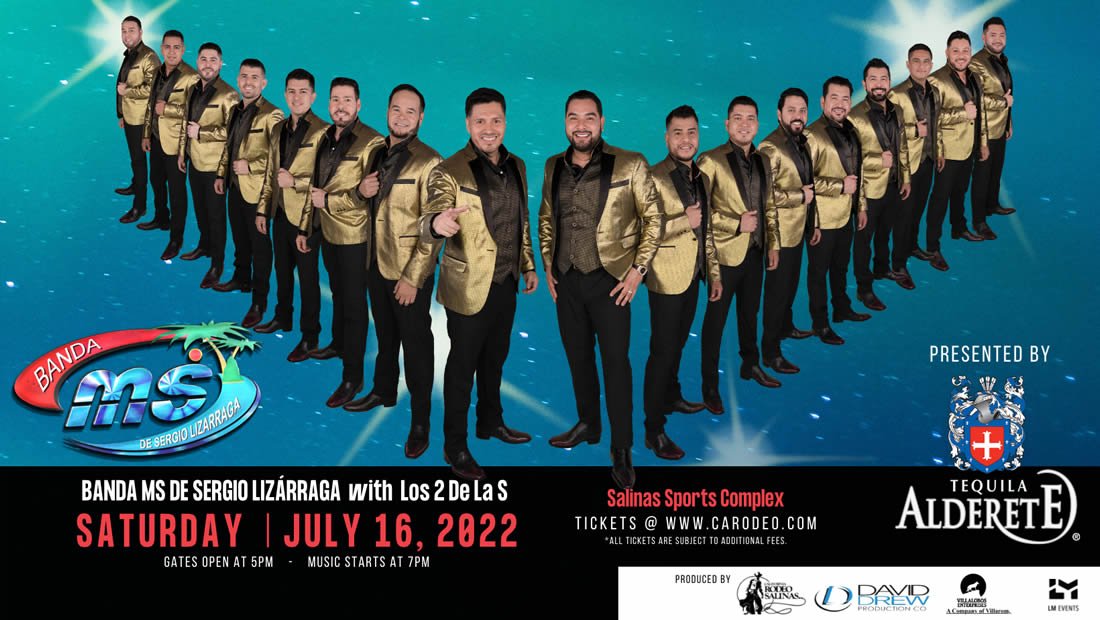 BANDA MS DE SERGIO LIZARRAGA, one of the most popular bandas in Mexico, will play at the Salinas Sports Complex during Big Week on July 16th.

The event is presented by Tequila Alderete.
LOS 2 DE LA S will open for BANDA MS.

BANDA MS DE SERGIO LIZARRAGA, one of the most popular bandas in Mexico, will play at the Salinas Sports Complex during Big Week on July 16th.

Gates will open at 5pm and music will start at 7pm on Saturday, July 16th.

$40* for general admission grandstand seats only

$250* for VIP tickets (in a tent on floor near stage). Food and beverage available for purchase, tables are first come first served but not reserved.

*All tickets are subject to additional fees.

was born in Mazatlan, Sinaloa in 2003, taking the initials of their homeland to give the group its name.

The founders of the band managed to combine their ideas and concerns to offer people a different and original product, using its own formula and printing a cheerful and versatile touch. Youth, explosiveness, and talent, are the words with which we can currently define the BANDA MS, created by seven teenagers who, after having belonged to other renowned groups, decided to form their own musical organization. For a year and a half, they planned the birth of a new band, they began to take the first steps to make reality, that at that time, were only dreams. To date, BANDA MS is synonymous with stability and international projection. Always with firm objectives, the group has earned the nickname of “the highest grossing band,” a slogan that reflects the work that has been carried out over more than 15 years of musical career.

The concert is produced by the California Rodeo Association, David Drew Productions and Villalobos Enterprises with media support from Univision 67 and La Tricolor.