We love festivals and strive to display the largest Bay Area list of outdoor activities.

Get out and enjoy live music, arts, food, dancing with your friends and family and date! Which one are you going?

Includes pancake breakfast, live entertainment, food booths, a car show and a fireworks show that starts at 9:20 p.m. Check for updates at celebrateantioch.org/event 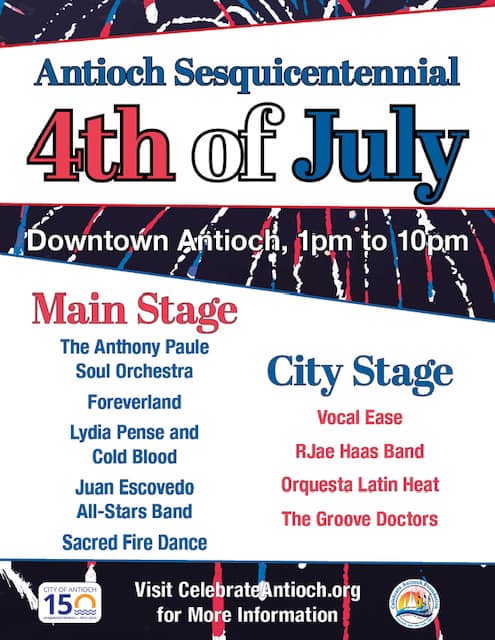 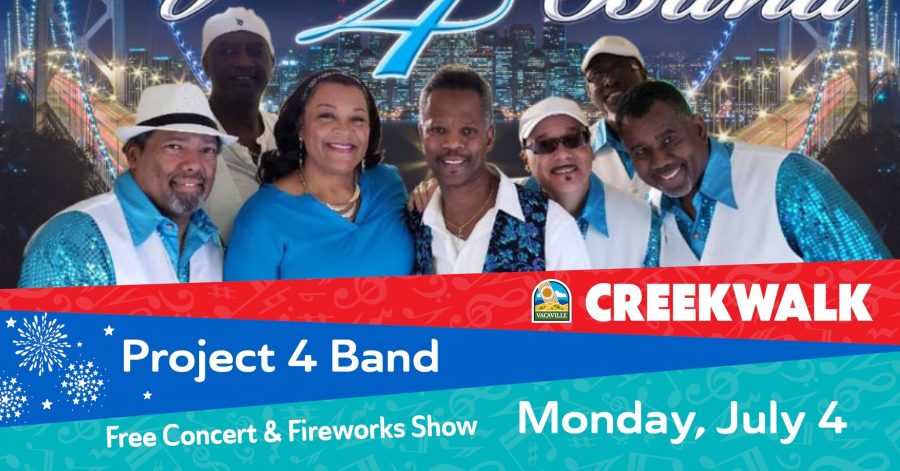 Here’s all the festivals!

Enjoy the regular rides and amusements, then stay for the fireworks show that’s usually visible from the Flight Deck roller coaster plaza. 4701 Great America Parkway, Santa Clara. Details will be posted at cagreatamerica.com

Sunday [some appear on Monday]:

A very inexpensive way for local artists to expose their work to adults and children in Alameda. Artists are encouraged to create artwork during the fair, so the attendees can see artists in action. Visit https://www.alamedaartfair.com

Live music at 3 p.m. and the largest, land-based fireworks display in Northern California begins at 9:30 p.m.

Admission: The festival is FREE for everyone! Parking is a modest $10 online (or $15 at the door) to help pay for the fireworks and you can sit just yards away from where they are being launched.

You don’t want to miss all the games, food, entertainment, family and dog parade, and a grand fireworks display. For more information, call 650-286-3380 or Details at fostercity.org

Napa. Spend the day tasting wine, then gather in Downtown Napa for a free concert at the Oxbow RiverStage (5:30pm) followed by fireworks display (9:30pm).

Purchase tickets for the Fourth of July Fireworks Spectacular with the San Francisco Symphony at Shoreline Amphitheatre.  https://www.mountainview.gov/depts/cs/events/july4thfireworks.asp

The parade will feature live music, a car show, food trucks, and many opportunities to grab souvenirs.  https://www.rwbsj.org/

Alameda 4th of July parade, 7am – 3pm. The largest parade in Bay Area.

Police will close streets along the parade route to traffic starting at 7:00 a.m. and most closures will remain in effect until 3:00 p.m. https://www.alamedaca.gov/RESIDENTS/Alameda-4th-of-July-Parade

Fremont 4th of July Parade, 10am. They will feature music and parade souvenirs.


Parade at 10:00am down Bridgeway and Caledonia. Afternoon picnic at Dunphy Park. Band will cover rock favorites from 12:30-4:30pm from the gazebo.  The evening events will take place at Gabrielson Park. Neon Velvet is sure to keep you dancing from 6:30-9pm. Fireworks will begin around 9:15pm and last for half an hour.

More information on the parade can be found here: https://vallejojuly4.com

The parade will conclude at Gardner Bullis School where refreshments will be provided.

Sonoma 4th of July. Parade begins at 10 AM, firework show at 5pm.

It will make its way around the town’s historic Plaza. After parade, an old-fashioned festival with food, drinks and game booths provided by nonprofit organizations in Sonoma.

A parade, mayor’s bike ride and a Red, White and Blue concert at City Plaza. Details will be posted at www.watsonvillerec.com


In previous years, the celebration was held in front of the Community Center, 28 Orinda Way, and included a flag-raising ceremony, fun run, parade and concert. Find details at https://orindaassociation.org/4th-of-july-parade

After a 12:15 p.m. welcome ceremony, enjoy live music from the Cocktail Monkeys and Pop Rocks, and beginning at 1 p.m., enjoy live dance from Santa Clara Elite and Performance Dance Teams . There will be food trucks, community booths and a kids zone with bounce houses and carnival games. santaclaraca.gov

Fairfield 4th of July Parade and Family Activities, 10am – 2pm.

Veterans and military are invited to a barbeque afterwards. More information at https://www.facebook.com/events/1387576475095659

The concert is from 3:00 to 5:00 p.m. on the 300 blocks of Broadway between Hillcrest & La Cruz. There will be booths for food and drinks, available for purchase. https://www.facebook.com/cityofmillbrae

Fireworks will be launched at the downtown parking garage on 216 Maple St and will be closed until 11 PM.

Enjoy music, wine, food and world-class performances spanning all genres. Featuring symphonic concerts, opera, jazz and dance with world-class artists performing music from Copland and Bernstein to jazz, swing, Broadway, bluegrass and country. Together with the ticketed evening performances, the Festival includes 20-plus free small ensemble concerts at CIA at Copia during the day, July 9-23. For further details and tickets visit festivalnapavalley.com.

This festival of classical and romantic music is performed on period instruments and includes a speaker series providing historical and social context and a free children’s concert. Cost varies. valleyofthemoonmusicfestival.org/season8

he program typically includes renowned musicians, composers and guest artists. The 2022 lineup is tba. Check for updates at cabrillomusic.org/

The festival usually includes daily cooking demonstrations, as well as artichokes served every which way — fried, steamed, grilled, alongside sausage or mixed into cupcakes and ice cream. Details can be found at artichokefestival.org/.

It included music, including blues, country, reggae and salsa. Free admission. Check for updates at PALMusicFestival.com.

CANCELLED Gilroy Garlic Festival: Last year’s festival was held on two weekends at the end of July at Gilroy Presbyterian Church at 6000 Miller Ave. in Gilroy.

The festival typically includes games, live music, a cooking contest, cooking demos and a Gourmet Alley lineup of garlicky fare, from succulent scampi to garlic bread. Specifics will be posted at gilroygarlicfestivalassociation.com/events.

Berkeley Kite Festival: In previous years, the festival was held at the end of July at Cesar E. Chavez Park at the Berkeley Marina.

Music@Menlo Chamber Music Festival: The festival is typically held in late July and early August at the Center for Performing Arts at Menlo-Atherton and Menlo School.

In years past, the festival has attracted top-notch artists, such as the Schumann Quartet and Russian baritone Nikolay Borchev, to the mainstage. musicatmenlo.org/

In 2019, the festival was held at the end of July in downtown Oakland and included live music, dance, food booths and family fun. Check for updates at Artandsouloakland.com.

Rosie Rally Home Front Festival: Last year’s festival, sponsored by the Rosie the Riveter World War II Home Front National Historical Park in Richmond, went virtual for two weeks in August. The festival will repeat its virtual campaign in 2022. Plans for an in-person festival have not yet been set. Check for updates at rosietheriveter.org.

Kids ‘N Fun Festival: Previously, the festival was held in August at the Memorial Park Amphitheater, 21163 Anton Way, Cupertino. The festival typically includes children’s activities, games, performances and international food booths. The event’s 2022 dates and details will be available this spring on the city of Cupertino’s website: bit.ly/3pIpZxE.

Burlingame on the Avenue: Will be held in August on Burlingame Avenue in Burlingame. In previous years it featured jazz, rock and blues bands. For updates check the city’s website: bit.ly/2HMLMNA.

Hayward Zucchini Festival: The last zuke festival — in 2019 — was held in August at Southland Mall in Hayward. The event typically includes a vast array of zucchini dishes, a zucchini-growing contest, live music, arts and crafts booths, children’s rides and food stalls. Find updates for 2022 at hayward-ca.gov/discover/calendar?page=19.

Monterey Jazz Festival: Sept. 23-25, Monterey County Fair and Event Center, 2004 Fairground Road, Monterey. The festival typically features scores of artists performing on eight stages. The 2022 lineup as well as ticket and other information will be posted at: montereyjazzfestival.org

Christmas in the Park: The 2021 holiday festival in San Jose ran from Thanksgiving through the beginning of January. It typically includes more than 500 decorated Christmas trees, animated displays and an inflatable beer and wine garden along with nightly entertainment. In addition, Blinky’s Illuminated Holiday is a mile-long drive-through at San Jose’s Lake Cunningham Park with 12 themed areas, 100,000 synchronized lights and a custom holiday soundtrack. When the date nears, find specifics for 2022 at Christmasinthepark.com.

Great America Winterfest: The 2021 festival ran from December through New Year’s Day at 4701 Great America Parkway, Santa Clara. In addition to the usual rides, the festival typically includes holiday attractions, such as a chance to send letters to the North Pole, Santa’s workshop, cookie baking in Mrs. Claus’ kitchen and ice skating. Find updates at cagreatamerica.com/events/winterfest

Did we miss your event? Use the contact form below to submit fair and festival information and updates.