The Berkeley Choro Ensemble (pronounced “shoro”), is a group of world-class musicians from the SF Bay Area that made its debut in January, 2010, at the Berkeley Public Library.

The group celebrates the music, culture and history of Brazil, with a special emphasis on the Choro genre, a style of music which emerged in the 1800’s in Brazil, fusing the music of Brazil’s European immigrants and the native music of Brazil’s indigenous and African-Brazilian population. In particular, the choro sound is somewhat akin to a combination of European classical music, ragtime, and blues. Historically, the choro style influenced Brazil’s most famous classical composer, Heitor Villa Lobos, to compose some of the world’s most hauntingly beautiful music, the Bachianas Brasileiras. Our repertoire also includes samba, bossa nova, jazz, and the music of Northeast Brazil.

For this concert, they will be joined by internationally acclaimed guitarist and composer Alessandro Penezzi of Sao Paulo , who is on the faculty of California Brazil Camp in Cazadero for two weeks in August. The ensemble will perform Brazilian choro compositions by Brazilian composers, as well as some original compositions by their members Harvey Wainapel and Ricardo Peixoto.

Your safe enjoyment of this wonderful music is our first priority! All artists, guests, and staff must be fully vaccinated and boosted for Covid 19 in order to attend. We will ask for proof of vaccination at the door. At this time, we are also requiring an N95, KN95, or double mask be worn, properly covering nose and mouth, throughout the performance.

Join us in person OR by live-stream!

WE GUARANTEE ALL OF OUR PERFORMERS A MINIMUM FAIR WAGE – thanks to people like you. 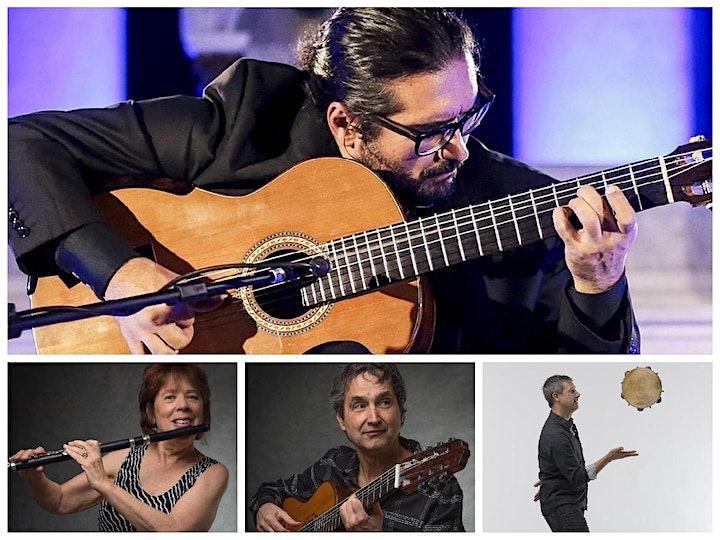 ALESSANDRO PENEZZI, guitar: Considered one of the great Brazilian guitarists of his generation, composer, arranger and guitarist Alessandro Penezzi was born in Piracicaba, São Paulo, Brazil in February, 1974.. He began his musical studies at seven years old. A multi-instrumentalist, Alessandro plays 7-string guitar, tenor guitar, cavaquinho, mandolin and flute. His teachers were Carlos Coimbra, Jair T. de Paula, Sérgio Belluco, and João Dias Carrasqueira. Alessandro has recorded over 20 CD’s of music, and has performed with many of the great Brazilians musicians, including Yamandú Costa, Carlos Poyares, Toninho Ferragutti, Oswaldinho do Acordeon, Laércio de Freitas, Caíto Marcondes, Arismar do Espírito Santo, Maurício Carrilho, Pedro Amorim, Joel Nascimento, Conjunto Epoque de Ouro, Rogério Caetano, Caio Marcio, Alexandre Ribeiro and Nailor Proveta. He has taught at California Brazil Camp since 2010, and is building a following in the US as one of the great virtuosos and composers in the Brazilian Popular Music genre in the world today. He resides in São Paulo, and tours regularly to Europe and Africa.

Flutist JANE LENOIR grew up in Tampa, Florida in a family of professional musicians, and left in her teens to study at Interlochen Arts Academy and later Oberlin College Conservatory. Trained classically and comfortable in many genres, she has performed with symphony orchestras, new music ensembles, chamber and early music groups, as well as jazz, latin and Brazilian groups. She has recorded with the Seattle Group for New Music, Matiz Ensemble, as well as Brazilian artists Paulo Sergio Santos, Rogério Souza, Caio Marcio Dos Santos, Netinho Albuquerque, and Alessandro Penezzi. Founder of the Berkeley Choro Ensemble and Co-Director of the Berkeley Festival of Choro, her CD “Jane Lenoir Plays Penezzi,” featuring the music and participation of guitarist Alessandro Penezzi, was released in August, 2017. www.janelenoir.com

Percussionist BRIAN RICE has devoted much of his musical career to playing Brazilian music, and choro in particular. His great expertise on the pandeiro (“Brazilian tambourine”) has led to performances with Mike Marshall, Jovino Santos Neto, Danilo Brito, Dudu Maia, Alessandro Penezzi, Paulo Sergio Santos and Rogerio Souzaamong others. He has performed at the Lincoln Center, Kennedy Center and the Savannah Music Festival with the Danilo Brito Quintet. Brian teaches Brazilian percussion at UC Davis, California Jazz Conservatory and California Brazil Camp and has taught workshops at several universities in the US as well as in Brazil. He is the co-founder and artistic director of the Berkeley Festival of Choro, now in its fourth year presenting choro music to the San Francisco Bay Area. www.brian-rice.com

​Originally from Rio de Janeiro, RICARDO PEIXOTO came to the US on a scholarship to the Berklee College of Music in Boston, and subsequently settled in the San Francisco Bay Area. As a guitarist and composer, he has continued to explore elements from his Brazilian roots, with their rich and diverse musical traditions, integrating them with the freedom and improvisational approach of jazz. Ricardo has recorded, performed, and collaborated with, among others, Claudia Villela, Flora Purim and Airto, Bud Shank, Dom Um Romão, Sivuca, Claudio Roditi, Raul de Souza, Toots Thielemans, Dori Caymmi, Guinga, Arturo Sandoval, Spok, Jovino Santos Neto, Marcos Silva and Terra Sul. His compositions have been featured on “Inverse Universe” with vocalist Claudia Villela, “Kindness of Strangers” with Terra Sul, and on Bud Shank’s “Tomorrow’s Rainbow,” among others. He has performed throughout the US, Europe, Canada, Japan and Brazil. Ricardo teaches at the California Jazz Conservatory and has also been on faculty at Jazz Camp West and California Brazil Camp. 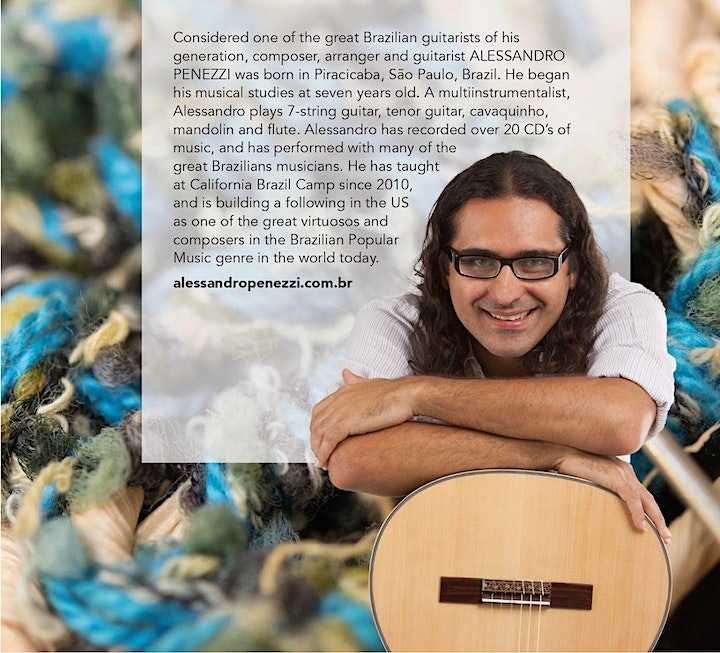