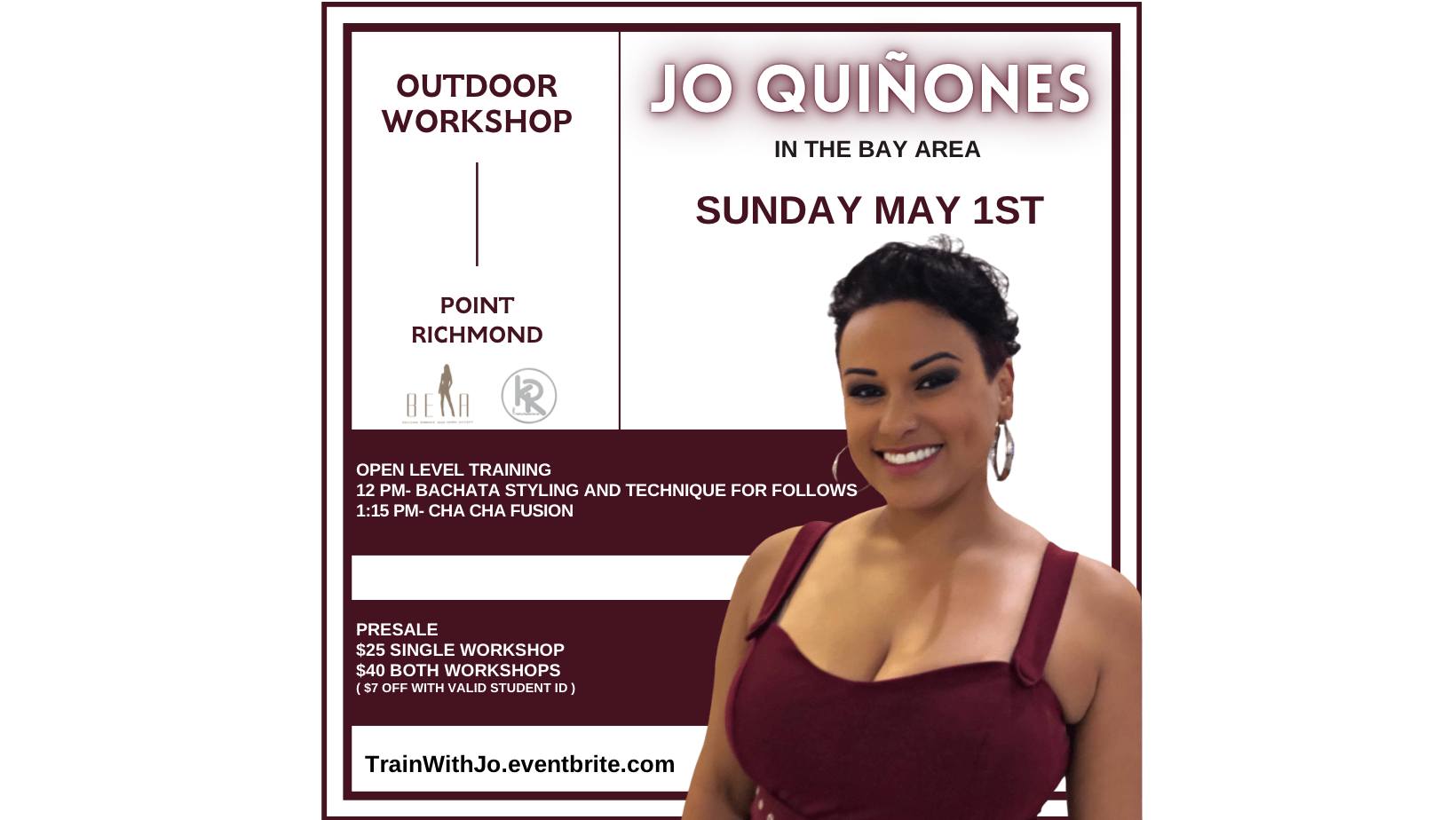 Don’t miss the opportunity to learn from one of the best in the industry.

WHEN: Sunday May 1st
TIME: 12-2:30pm
WHERE: Miller Knox regional shoreline
REGISTRATION FEE: $40 both or $25 one workshop

Jo Quinones has Latin Rhythms flowing through her vains. Having a mother from the Dominican Republic and a father from Puerto Rico she was raised being surrounded by different dance forms such as Ballet, Puerto Rican folklore and jazz at the early age of 5. A versatile artist, Jo continued her study of dance by training in ballroom and Latin dance forms before becoming a professional in 1997. Soon after becoming an instructor, she managed the studio for two years. After leaving Arthur Murray Dance Studio she became an independent instructor holding group and private lessons all around the Inland Empire. Her passion for acting also led her to become a member and graduate of the prestigious American Academy of Dramatic Arts. She was an Assistant Director in the Otero Dance Co. directed by the world renowned Gloria & Claudio Otero. In June of 2002, she formed Afeenix Dance Co., an energetic group successfully dominating the Inland Empire and currently Southern Ca. Her stage and television credits include Salsa congresses in Los Angeles, San Francisco, Chicago and Puerto Rico, and special appearances at the Asian International Telecommunications Expo, China, Telemundo, Univision, Caesars Palace in Las Vegas, Singapore and CBS. She has been an invited guest performer at Cancun’s Club Med and South Carolina’s Sea Brook Island. Jo is one of the few performers who can thrill an audience and leave them wanting more. Her blend of charisma, sensuality and style entertains and inspires!
_____________________________________________________________________

Kathy Reyes is an international Latin Dance instructor with 10 years of experience. Currently based in Berkeley Ca, founder of KRDance, Producer and co- Producer of two of the top monthly socials in the East Bay, BACHATANightz and Rico Fridays. Creator or the women’s history month BELLA Dance Weekender in the Bay Area.

If you have any questions, please email me at
krdance.official@gmail.com