Accion Latina’s Juan R. Fuentes Gallery is pleased to invite you back to a final opportunity to view our “Oda a la Muerte” printmaking exhibition.

Join us for an evening in the heart of Mission’s Latino Cultural District and participate in a community Artist Talk moderated by Mission artist Josue Rojas and curator Veronica Solis.

“Oda a la Muerte” is a group printmaking exhibition focused on the celebration of Día de los Muertos.

The exhibition is a dialogue between Mexican and US artists, exploring the significance of death from their own cultural and personal perspectives. The exhibition will showcase over twenty artists, accomplished and emergent, from both side of the border, who have produced art works using intaglio and relief printing techniques, from etching to linoleum and woodcuts.

Day of the dead, the Mexican indigenous holiday that pays tribute to loved ones who have passed away, has become more popular in Western culture in recent years, but at least some of its true meaning (a day where indigenous people believe the spirits of those deceased return to Earth) has become obscured.

Artist Veronica Solis is aiming to fix this with her new show “Oda a la Muerte,” an exhibit featuring more than 20 emerging and accomplished printmakers both sides of the border, who through their art and cultural backgrounds, will share their own unique perspective of what death looks like to them. 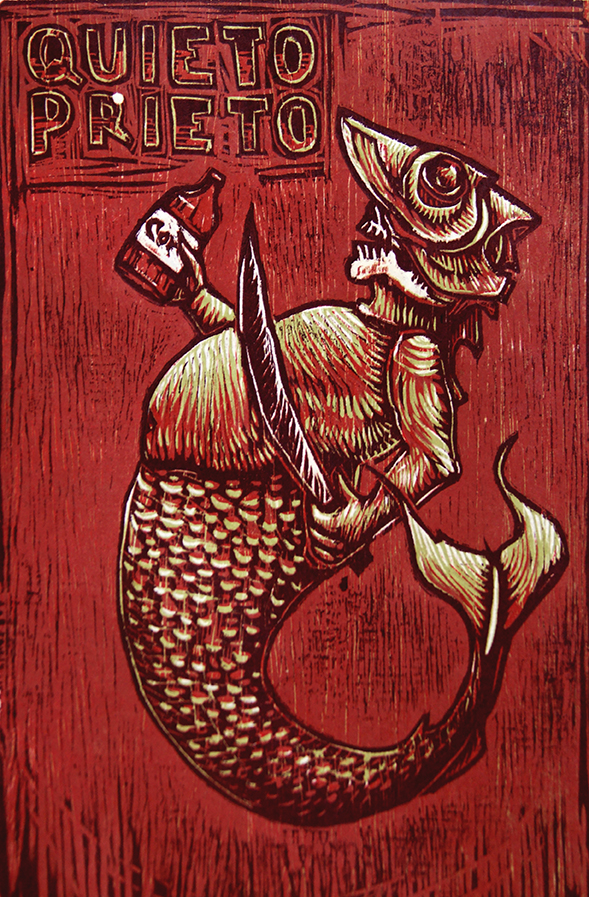 “There are many reasons why I’m doing this—one is that I consider [it] important to take spaces and represent ourselves,” said Solis. “We need to tell about our culture, take our own narrative and present ourselves.”

Solis, who is originally from Mexico, began her passion for engraving after her teacher at the time, Gustavo Mora, took her to an engraving shop. But it was through personal and social media connections she’s made here in the Bay Area as well as classes she took in an art school in San Carlos in 2013, that gave her the will to create this exhibition, which features at least 10 artists from Mexico.

“For me, seeing their work while living in San Francisco brings me closer to my heritage,” Solis said. “Being Mexican, I just felt the necessity to make it be seen. We have to make a presence here, and with the Mexican support of those here, we found ourselves in the art of these artists.”

Printmaking is a largely male-dominated craft and Solis felt that it was important that more female engravers showcase their art. With help from a female teacher she had from Mexico, Solis was able to make this possible. “Oda a la Muerte” is primarily her vision as an immigrant woman of color. 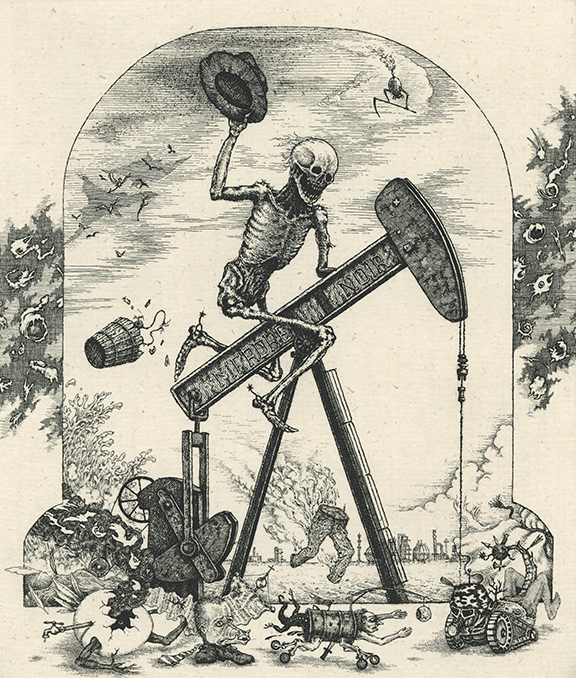 “The Last Roundup,” by David Avery

“We [women] have perhaps other experiences and ideas that we can bring to the community and we are connected to art communities south of the border where we come from,” Solis said. “In that way, we can work on bridging these communities.”

After meeting so many artists throughout Mexico as well as here in San Francisco, Solis has put together an event to showcase varying artistic conceptions of death with etching and relief prints using both linocut and woodcut techniques. “El Grabado,” an engraving technique, is an artistic discipline in which the artist uses different printing techniques.

“These artists have their studios and work in cultural centers, it’s part of the heritage of Jose Guadalupe Posada, a well-known engraver,” Solis said. “Celebrating Day of the Dead through this, celebrates the popular culture that Posada left behind. After all, every culture has their own way of celebrating, this is simply a ritual and stage of life we go through.” 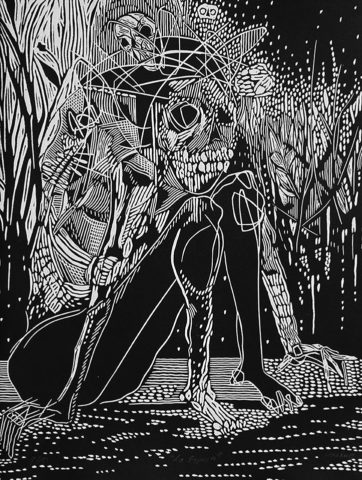 Solis feels that Latino culture is lacking in representation, and events like this can act as a remedy for cultural appropriation, especially in now heavily gentrified San Francisco where many see the holiday as something of a carnival. This Day of the Dead celebration will be special, she feels, because it will reconnect Latino society with its pre-Columbian roots, thus creating a cultural continuum.

“We’re still here and we need to make ourselves visible in different ways and for me the way I can do that is through my cultural traditions and the art I use to express myself,” Solis said. “There are other people in the Mission and Bay Area that are also organizing cultural events and I’m happy that many of them are Mexican, Latinos doing that.”

The exhibit will also pay homage to graphic artist Michael Roman, the late Mission artist, whose work has had an immense influence on the neighborhood’s art. Best known for his layered prints portraying political and cultural icons, Roman died in December of 2016 at the age of 60. An altar will be made for him in his honor at the event.

“We want the Mission community from here, from San Francisco, and other parts to come and see the work of these various artists who are doing this work for the community,” Solis said. “We want to close the gap from the artists here and Mexico and bring them all together in one place.”