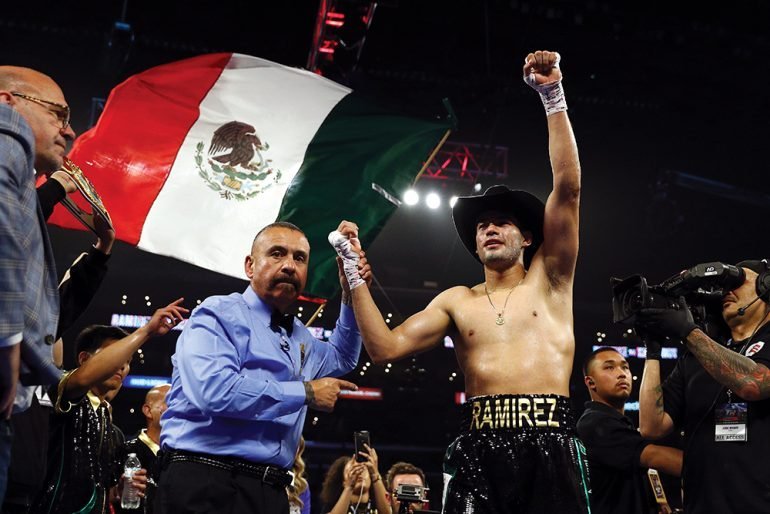 The two light heavyweights are looking to move into contention for a title shot. The 12-round fight will pit the WBA #1 ranked, Boesel against the #2 WBA ranked Ramirez.

The co-main event will feature one of the most exciting Mexican boxers in the lightweight division!

The undefeated William “El Camaron” Zepeda (25-0, 23 KOs), defending his WBA Continental Americas Lightweight Title against the resilient, former world champion, Rene “Gemelo” Alvarado (32-11, 21 KOs) of Managua, Nicaragua in a 10-round lightweight fight. The event will take place at Toyota Arena in Ontario, CA, and will stream live exclusively on DAZN.

Where is the Acosta vs. Rivera fight?

The fight will take place at the Toyota Arena in Ontario, CA.

“I’m excited to be fighting back in California,” said Gilberto “Zurdo” Ramírez. “May 14 is not too far away, and I feel great about how everything is going. I know Dominic is the best light heavyweight from Germany and he’ll bring his best. This is a good step towards my overall goal and I’m glad I’ll be able to put on a great show come fight night.”

“I’m looking forward to going to California for a great fight against a tough opponent in ‘Zurdo’ Ramirez,” said Dominic Boesel. “I’m sure this fight will please the boxing fans worldwide watching live on DAZN.”

After spectacular back-to-back knockout victories over Cuba’s Sullivan Barrera in July 2021 and Yunieski “El Monstro” Gonzalez in December 2021, Gilberto “Zurdo” Ramirez is knocking on the door of a world championship title shot when he faces #1 WBA ranked Dominic Boesel. ‘Zurdo’ is committed to continuing his winning and knockout streaks as he proves that he is an elite, feared fighter in the light heavyweight division. Having previously held the WBO Super Middleweight World Championship, ‘Zurdo’ is ready to conquer another weight class on his road to glory.

Ranked #1 by the WBA and #5 by the WBC in the light heavyweight division, Dominic Boesel formerly held the WBA Interim Heavyweight World Championship in 2020 and currently holds the IBO World Light Heavyweight Title. The German fighter is set to make his U.S. debut on May 14 and is determined to make a good showing for the passionate SoCal boxing fans. Defeating ‘Zurdo’ will cement his standing in the world rankings, putting him closer to another world title shot. Having faced previous undefeated fighters like Sami Enborn and Tony Averlant and winning multiple regional titles like the WBA Continental Light Heavyweight Title and WBO Continental Light Heavyweight Title, Boesel is ready to prove he is the best at 175lbs.

The card will stream live on DAZN in over 200 countries across the globe. You can sign up for a subscription on DAZN.COM.