Making Movies is the Kansas City Band Breaking Down Barriers for Latinos in the US Heartland.

Hurray for the Riff Raff and Making Movies

For the last three years, Making Movies have brandished the slogan “We are all immigrants,” highlighting their message of global human connection.

The story of Making Movies begins in Panama with a family eyeing the U.S. in search of the fabled American dream. They relocated to a suburb of Kansas City with help from family friends and eventually fell in line with the customs of their adopted home. Brothers Enrique and Diego Chi, still boys then, rapidly recognized their otherness by observing their surroundings.

“I felt extra isolated,” says Enrique, the band’s guitarist and lead vocalist. “I remember every time my mother heard someone speak in Spanish, she would immediately go talk to them and ask where they were from, because it was so rare. They would usually become friends, and the next weekend those people would be at our house.”

Enrique explains how they and other immigrant children would be picked up by a short-bus meant for disabled children on their daily commute to school. Being othered along with the most marginalized members of their community formed the brothers’ vision of the world, helping them understand the loneliness of the immigrant experience and using music as the medium to process those emotions. “Music was my connection to the outside world,” recalls Enrique. “I realized through artists and songs and bands that there was a world very different from suburban Kansas City. Yes, I remembered my life back in Panama, but music was my daily reminder.” 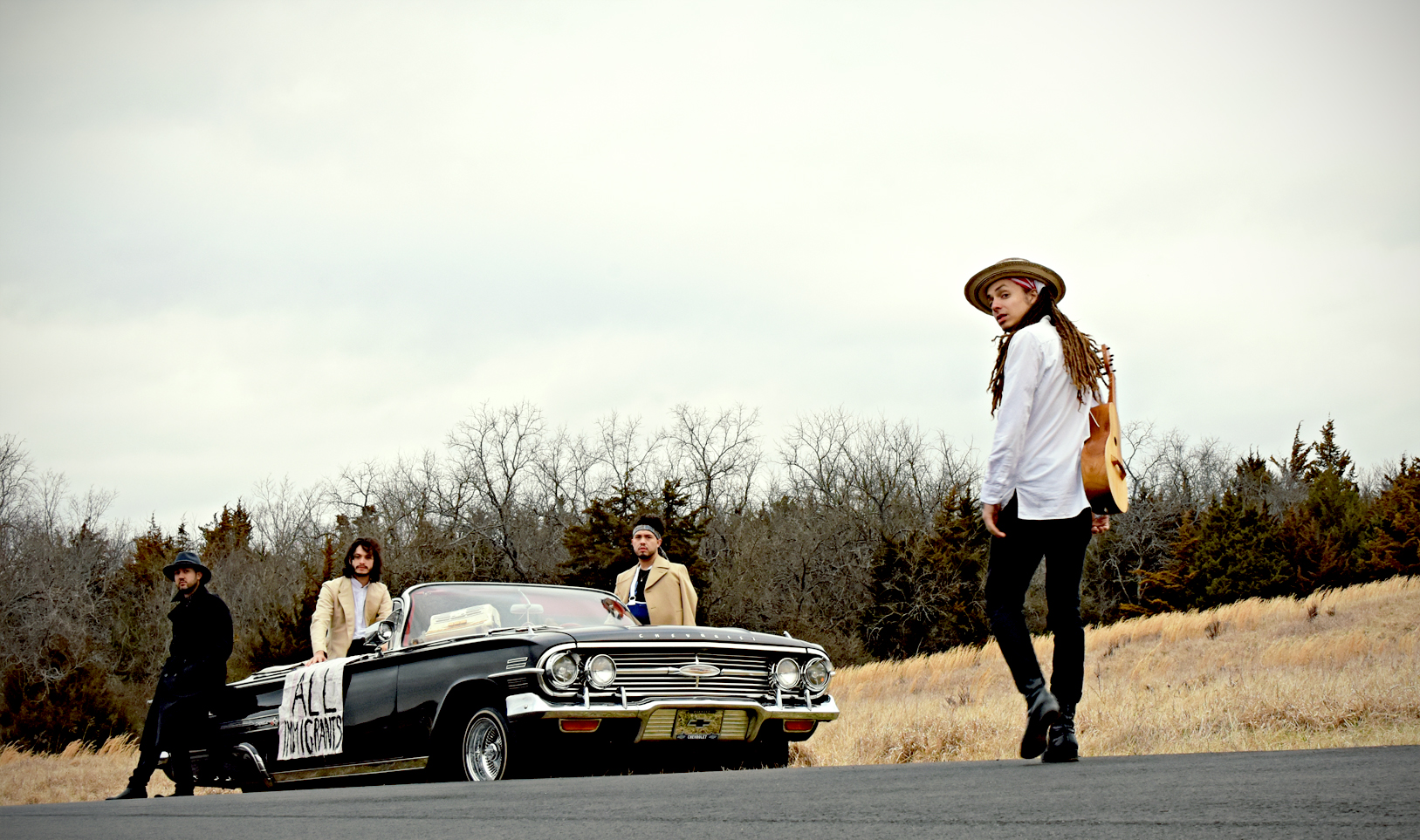 Photo by Brian Slater. Courtesy of the artist

Making Movies have been active for a decade, releasing their first album A La Deriva back in 2013, and now their follow up I Am Another You. Their sound collides rock, psychedelia, and traditional Latin rhythms. In the latter category, the band’s other set of brothers, Juan Carlos and Andres Chaurand, take the wheel. The first-generation Mexican-American brothers represent the backbone of the band’s distinct Afro-Latino flair, bringing in elements of Cuban percussion, caja performance, and traditional Veracruzan zapateado, which they learned from their mother.

The band practices a sort of musical anthropology, tracing their artistic footsteps back through history, equally inspired by the gods of rock and the Fania All-Stars roster. “The Yoruba culture that spread throughout the Americas because of colonial slave trade – their rhythms are what became the basis for son cubano, cumbia, merengue, and all these things, but they’re also the basis for Bo Didley and Motown,” says Enrique. “When Willie Colon and his buddies were making salsa records in 1978, they were making music that was distilled from these African rhythms and influenced by what was going on in New York at the time and creating a fusion. They were pulling from son cubano, which was already a fusion of rhythms like bembé, Spanish guitar, and Spanish poetry structures. So, looking at this history, what we decided to do was grab those core rhythms and fusions and build on what was already there, and that created the space Making Movies lives in.”

I Am Another You reflects on this cultural transience by telling parallel stories of characters in Venezuela, Mexico, and the Midwestern U.S. and finding common ground in their struggles. The song “In Lak’Ech Ala K’In,” translates from Mayan as “I am another you, you are another me” and drives home the band’s thesis statement over loungy jazz-rock. Hard rocking singles “Locura Colectiva” and “Spinning Out” address today’s world-gone-mad syndrome, with the former placing the Venezuelan national crisis at the heart of their sobering pleas. Though thematically serious, the album also manages to find moments of levity, as with the song “Brave Enough,” where the band is accompanied by Hurray For The Riff Raff’s Alynda Segarra for a sweet slow-dancing rumba number.

For the last three years, Making Movies have brandished the slogan “We are all immigrants,” highlighting their message of global human connection. “It’s an idea that all the music we love is a mix of all kinds of people and their travels throughout the world,” says Enrique. “You can’t play a guitar and not respect the fact that it’s an instrument derived from Middle Eastern laúd. You have to accept the reality that everything comes from somewhere else and that human migration is a part of life.” But in today’s overtly politicized world the meaning of the phrase has evolved, and it took a fateful meeting after a keynote speech by political singer-songwriter and activist Billy Bragg to put their message into perspective. “He came up to us and said, ‘it’s your turn now,’ which in his speech he’d shared Pete Seeger once said to him. The baton’s been passed on and now it’s your job to write songs about what your people and your generation is going through.” 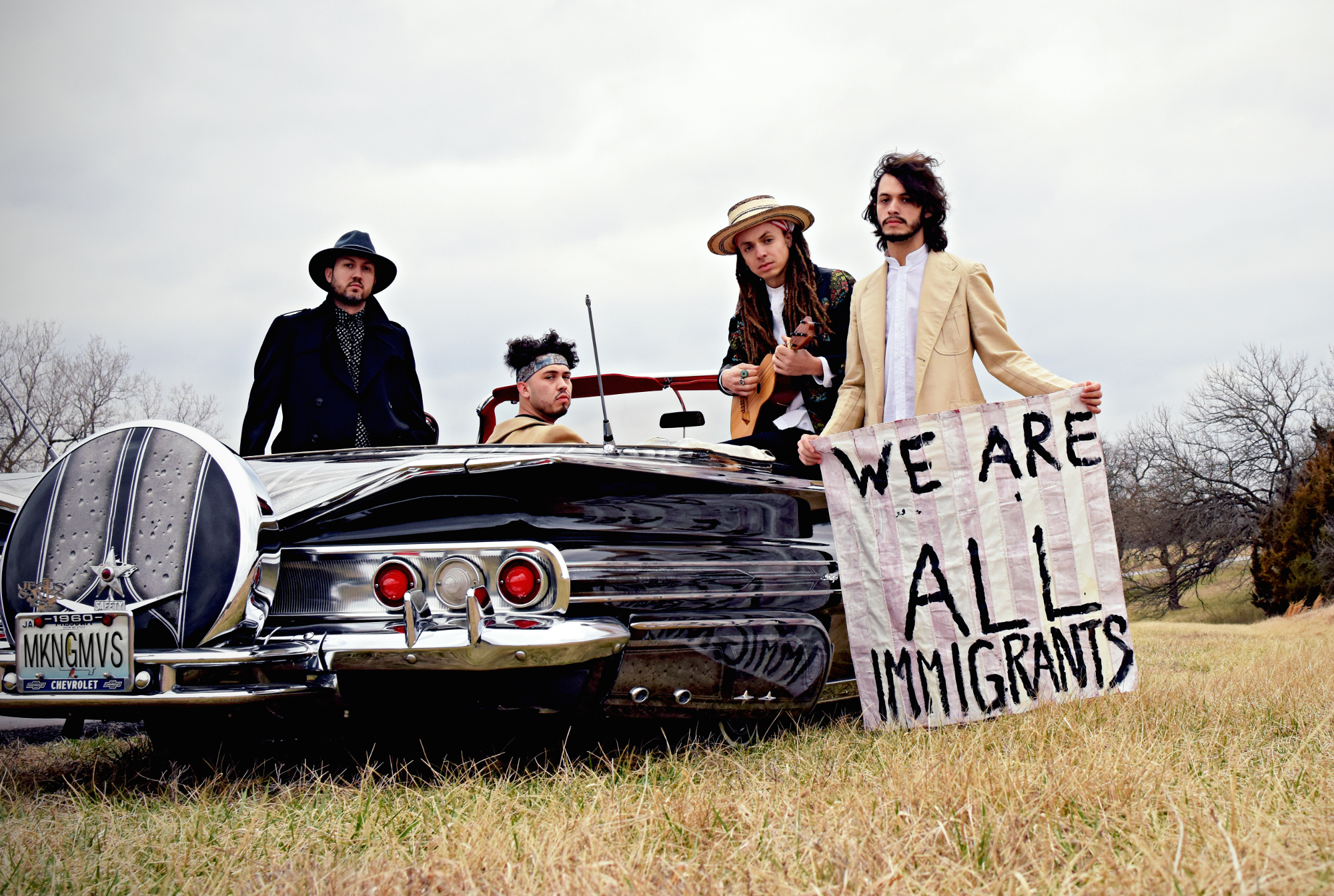 Photo by Brian Slater. Courtesy of the artist

And Making Movies has done just that, becoming a voice of one of many Midwestern Latino experiences, without withdrawing from the mainstream. Diego Chi best articulates this balance by describing how their hometown has rallied behind them. “They see us as Kansas Citians,” he says, “not just as those Latino guys over there. Ironically, that is what we experience in the greater national conversation, where the Latino experience gets put in another room, another alley. But in Kansas City it has been very surprising, and we’re very grateful to be represented as a Kansas City band.”

Making Movies’ I Am Another You is out now.