Mexico still has a Chance!

This Wednesday 11am, If Mexico beats Saudi Arabia, AND Argentina loses to Poland… MEXICO WILL ADVANCE!

For Mexico, victory is essential to have any chance of making the last-16, coupled with other results going their way. After opening with a goalless draw against the Poles, they were beaten 2-0 by Argentina thanks to moments of magic from Messi and Enzo Fernandez that lit up an otherwise drab affair on Saturday night.

It’s easy to foresee a draw, which would eliminate Mexico and need Saudi Arabia needing a favour from Poland.

Mexico is participating in their eighth consecutive World Cup and 16th overall.

Only Argentina, Brazil, Germany and Italy have made more appearances at a World Cup than Mexico.

Argentina’s celebration after defeating Mexico in their World Cup match on Saturday did not sit well with superstar boxer Canelo Álvarez.

Álvarez, who is from Guadalajara, Mexico, appeared to take issue with Lionel Messi specifically after Argentina won the match 2-0 to save them from the potential embarrassment of missing the knockout stage in the World Cup.

In one of the videos of the locker room celebration, Messi appeared to lightly kick a Mexico jersey that was crumpled on the floor.

Álvarez accused Messi of disrespecting his country, tweeting the Argentinian was “cleaning the floor” with a Mexican shirt.

He added, “He better ask God not to run into me.”

Canelo Alvarez has threatened Lionel Messi after accusing him of disrespecting his country's flag. pic.twitter.com/01z1RhMgs9

Sergio Agüero, who played with Messi on Argentina, tried to simmer things down.

“Mr. Canelo, don’t look for excuses or problems, surely you don’t know about football and what happens in a locker room,” he wrote. “The shirts are always on the floor after games have finished due to sweat and then if you look properly, he makes the movement to remove his boot and accidentally hits it.” 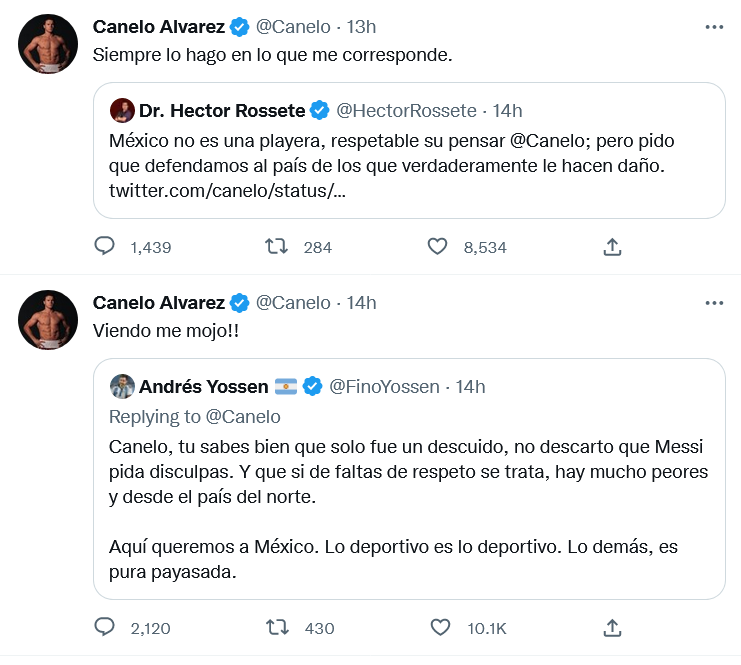 What was the Mexican Jersey doing in the floor of the Argentines?