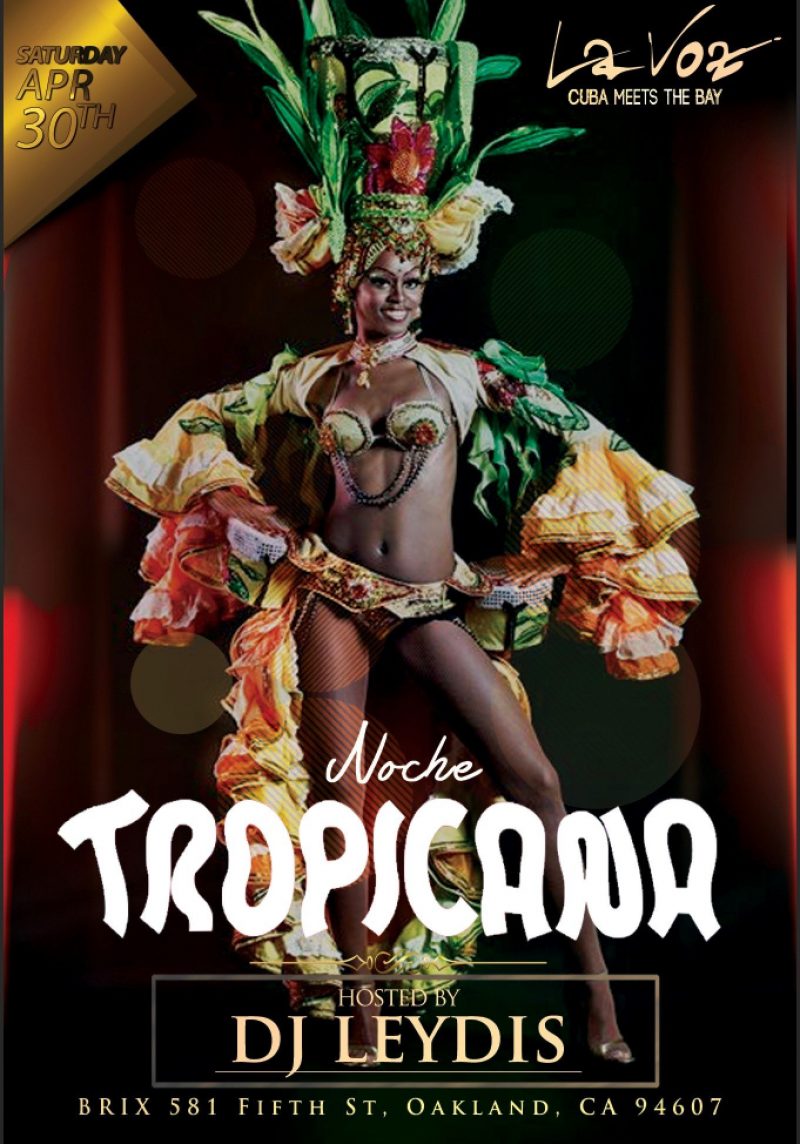 DJ LEYDIS is been Hosted series of event about Cuban culture in Bay Area::

“La Voz Cuba meets The Bay” was started in Oakland with the purpose of bringing Cuban artists and their culture to the Bay Area while also making a connection and mixing both cultures.

This Night is inspired by TROPICANA , is a Cuban cabaret with more than eight decades of operation. it is also known as “Paradise under the Stars” In 1940 it took it’s current name, which is inspired by the melody premiered in that place and composed by the flutist Alfredo Brito.

Llega la Rumba con fucion y Cabaret por el talentoso Denmis Bain, Denmis is probably most known for his work with the Havana Nights Dance Company. He toured and performed in more than 16 different countries and was a lead dancer in about 450 performances of “Havana Nightclub – The Show”. The performances received standing ovations and outstanding reviews from critics and audiences all around.

Born and raised in Cuba, DJ Leydis combines contemporary hits with a distinct fusion of Latin flavors, R&B classics, and roots reggae blends. Involved in the Cuban hip-hop movement since its inception, DJ Leydis helped organize some of the country’s most respected and best-attended events and community programs.

Originally from Mexico City, DJ Antonio has called the Bay Area his home for over 25 years. It is here in the Bay Area that he discovered his love for Cuban music and more specifically, timba. He has dj’ed internationally, but has focused most of his time in spreading this amazing music through concerts, clubs & events here in the Bay Area for many years. Through his dedication of helping to bring this new sound, he has been fortunate to be able to dj alongside some of the greats of this genre like Elio/Elito Reve y su Charangon, Barbaro Fines y su Mayimbe, Charanga Habanera, Los 4, Gente de Zona and local favorites like Fito Reinoso & Conjunto Cespedes which Bobi Cespedes was a part of. This New Years Eve, you can expect that he will bring the latest from Cuba, but will make sure to mix it up with bachata, reggaeton salsa, merengue & more!