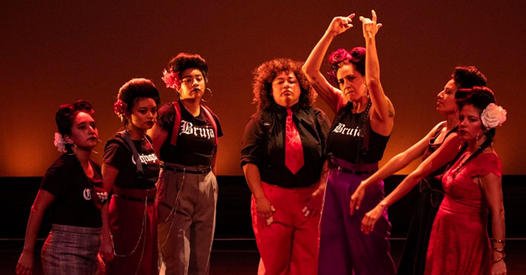 Join MACLA on Saturday, June 11th for an outdoor performance of Pachuquismo!

Pachuquísmo is a multi-disciplinary, rhythmic performance that unveils a forgotten history of Mexican-American female youth and explores the struggles that communities of color continue to face today.

The work overlays tap dance with Mexican zapateado, features a live band that brings together Jazz with traditional Son Jarocho music from Veracruz, Mexico and explores the Chicanx experience through percussive conversations.

With the 9-person, all-female cast donning full zoot suits, Pachuquísmo pulls the narrative of the Zoot Suit Riots out of the male-centered context and portrays the experiences of las pachucas of the 1940’s through movement, spoken word and video.

Join the return of Vanessa Sanchez and La Mezcla’s multidisciplinary performance Pachuquísmo, a rhythmic remembrance of las Pachucas and their stylized power of rebellious resistance, live on our main stage!

Returning after two sold-out shows, Pachuquísmo unveils the forgotten history of Mexican-American female youth during the era of the Zoot Suit Riots and explores the struggles that communities of color continue to face today.

The evening will also feature “Ghostly Labor: a Dance Film,” a short film that explores Vanessa Sanchez’s newest work in-progress, Ghostly Labor. Based on farm worker interviews in California, the dance film honors the sacred hands that feed us, and was filmed on a farm in Half Moon Bay, CA.

Vanessa Sanchez is a Chicana-Native dancer, choreographer and educator who focuses on community arts and traditional dance forms to emphasize voices and experiences of Latina, Chicana, and Indigenous womxn and youth. Based in San Francisco, she is a 2019 Dance/USA Artist Fellow and the founding Artistic Director of La Mezcla, a rhythmic ensemble that explores historical narratives and challenges social injustice through tap dance, Mexican zapateado and Afro-Caribbean rhythms. Sanchez’s work is deeply rooted in community engagement, creating rhythmic choreography to tell stories of collective resistance, and producing accessible and engaging arts events for BIPOC communities. She created the Tap dance and Son Jarocho production Pachuquísmo, which received a New England Foundation for the Arts NDP grant and the Isadora Duncan Award for Outstanding Production. Sanchez is currently a Dance Lecturer at UC Santa Cruz and received a Hewlett 50 Arts Commission grant for her upcoming work “Ghostly Labor,” a percussive piece that explores the exploitation of female labor in the US-Mexico Borderlands, set to premiere in 2023.

La Mezcla is a polyrhythmic, multidisciplinary San Francisco-based dance and music ensemble rooted in Chicana, Latina and Indigenous traditions and social justice. Founded in 2015 by Vanessa Sanchez, their work brings together Tap dance, Son Jarocho and Afro-Caribbean rhythms to bring the often unseen histories and experiences of communities of color to stages, streets and fields. La Mezcla has been featured on the KQED Arts series “If Cities Could Dance” and The Lincoln Center’s “Virtual Concerts for Kids.” Their show Pachuquísmo, an all female Tap dance and Son Jarocho performance about the Zoot Suit Riots, received the NEFA National Dance Production grant and is set to tour through 2022. Their new work “Ghostly Labor,” explores the legacy of labor and the joy of collective resistance in the US-Mexico borderlands.