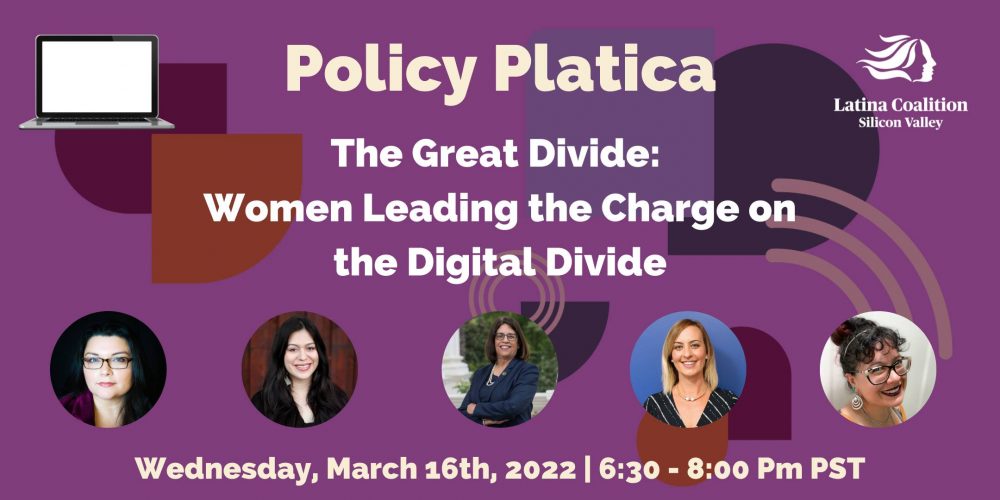 Join us for our first Policy Platica of the year focused on the inequitable access to internet and digital devices in our communities.

The Latina Coalition is elated to host this timely discussion on the digital divide among communities of color. It is our intention to discuss the lack of internet access and digital devices in our communities, how it has affected distance learning and remote work for students and families, and how Santa Clara County and city and state plan to address these issues.

These women are calling out the inequities in our communities and ways that they are advocating for a more just and equitable solution when it comes to the gap in internet access and digital devices.

Moderated by Vanessa Grijalva , Policy and Advocacy Chair of the Latina Coalition of Silicon Valley

We welcome our expert panelists:

In November 2016, Cecilia Aguiar-Curry was elected to the California Assembly to represent the 4th District that includes all or parts of Napa, Lake, Yolo, Sonoma, Colusa and Solano counties.
Cecilia grew up in western Yolo County and has long served her community. After going to school and working in the Bay Area for several years, she moved back to her hometown of Winters where she almost immediately became active in the local community and a regional leader on several issues. She first served as planning commissioner and then was elected to the city council eventually serving as the first female mayor of Winters.
While growing up, Cecilia was surrounded by agriculture. As a youth, she cut apricots in the packing shed and helped her father in the family almond and walnut orchards in the area. She is still involved in the family farm to this day as she and her brothers own an 80-acre walnut orchard.
After earning a degree in business administration from San Jose State University, she launched a consulting firm, Community Mitigation and Consulting (CMAC) that specialized in public outreach with government agencies.
As mayor of Winters, Cecilia oversaw improvements in the downtown area and worked to improve local schools, including securing computers for every sixth grader in the city. She also brought broadband internet to rural communities, built senior housing and helped the area to become an agricultural and food innovation hub for the region.
With the understanding that employment is central to any successful community, Cecilia helped bring a PG& E training facility to Winters that provides hundreds of jobs for local residents.
Cecilia was also involved in efforts to create the Berryessa Snow Mountain National Monument in the inner California Coast Ranges that was proclaimed by President Obama in 2015.
She currently resides in Winters a block from her childhood home with her longtime partner, Larry Harris. She has two grown daughters Megan and Beth, stepson Ben and three young grandchildren.

Mayra Flores has spent the first 16 years of her career as a journalist in the South Bay. She is an award-winning reporter and life-long community enthusiast. Mayra is a graduate of the Hispanas Organized for Political Equality (HOPE) Leadership Institute and a proud San José State University Spartan. She is the Chief of Staff to Santa Clara County Supervisor Susan Ellenberg. Outside of her work responsibilities, she is also the 2022 Co-Chair for the Latino Leadership Alliance and a contributor to East Side Magazine. She is a mother and proud daughter of immigrant parents.

Rosanna Alvarez is a braided scholar and artist, who lives poetically, while sharing her life lessons as an educator, poet, activist and consultant. She is a native Chicana from East San José who loved her view of the Gilroy skyline during her 13 years as a Gilroy resident. She is the first-born of nine siblings, a mother of three fierce guerreras (little warriors), a trucker’s wife, and an Aztec dancer with Kalpulli Izkalli. She has organized and spoken openly about the digital divide and digital segregation throughout the pandemic, while advocating and convening toward critical change throughout the Bay Area.
Rosanna currently teaches Comparative Ethnic Studies and Women’s Studies at De Anza College, in addition to teaching within Chicana and Chicano Studies at San Jose State University. She is also the creative force behind Citlali Rose, the co-founder of Eastside Magazine, and the voice of the Hella Chingona Podcast.

Ms. Tatis currently serves as Program Director for the San José Digital Inclusion Partnership with the California Emerging Technology Fund (CETF). She holds a Master’s Degree in Human Development in Educational Leadership and Human Services from Pacific Oaks College. Ms. Tatis has over 20 years of experience leading multiple community-based initiatives and public-private partnerships in support of educational equity for all families and children living in Santa Clara County. She has passionately served in a number of roles as community organizer, grant administrator and consultant for community and government organizations serving diverse and underserved populations of families with young children.