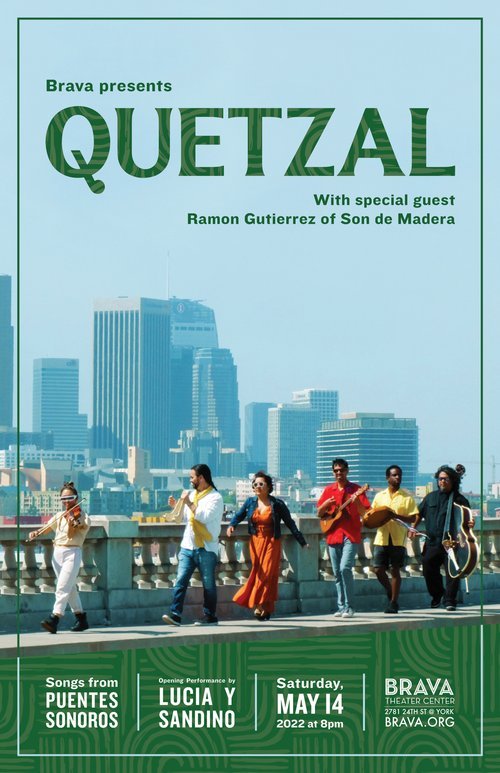 Brava presents Quetzal – live on our main stage – performing songs off their most recent album, Songs from Puentes Sonoros.

The music will be set to the backdrop of curated photos and film footage from the band’s trip to Veracruz in 2017 which was the inspiration for the creation of the album Songs from Puentes Sonoros.

Brava presents Quetzal – live on our main stage – performing songs off their most recent album, Songs from Puentes Sonoros. Quetzal will be joined by longtime collaborator Ramon Gutierrez of Son de Madera, Lucia Gutierrez Rebolloso, and Sandino Gonzalez Flores. The music will be set to the backdrop of curated photos and film footage from the band’s trip to Veracruz in 2017 which was the inspiration for the creation of the album Songs from Puentes Sonoros.

This amazing evening will open with a set by Lucia and Sandino, two young musicians who grew up together in the Fandango Son Jarocho tradition, who will perform a selection of original arrangements of sones jarochos and jazz standards in duo.

Brava has undertaken appropriate modifications to comply with health and safety protocols provided by the San Francisco Department of Public Health. These measures include requiring proof of vaccination, booster shot if eligible, and mandatory face covering that completely covers nose and mouth, secured with ear loops or head strap (gaiters and bandanas are not acceptable), increased cleaning before performances, and a no-touch or low-touch experience. Read Brava’s full Covid Protocol here.

QUETZAL is a relentlessly innovative Grammy award-winning ensemble that narrates the social, cultural and political stories of humanity.

You hear a band that has cut its teeth organizing, that has worked to fight forms of oppression in the communities they are connected to. And in pursuit of forging these creative and political bridges, you hear artists who are at the epicenter of the transnational world of son jarocho.” Quetzal’s live shows are filled with moments of tenderness, fervor and vivid storytelling that transport the audience into a world of affirmation and belonging.

They have graced stages across the US, Canada, Asia and Mexico for nearly 26 years. Recognized by notable institutions such as the Library of Congress and The Kennedy Center, the traveling exhibit “American Sabor: Latinos in U.S. Popular Music” sponsored by the Smithsonian Institute, featured Quetzal as leaders and innovators of Chicano music. This feat coupled with their Grammy Award winning album on Smithsonian Folkways label “Imaginaries” (2013) marks the importance of their past and ongoing work.

The relevance of Quetzal’s music and lyrics have been noted in a range of publications, from dissertations to scholarly books. Most recently and as a testament to the body of music and community work Quetzal has accomplished on and off the stage, in the summer of 2017 Gonzalez’s tarima (stomp box) and zapateado dance shoes were acquired by the National Museum of American History and are now on permanent display.

Join Quetzal for this unique opportunity to study their signature pedagogy first-hand in this three-hour course.