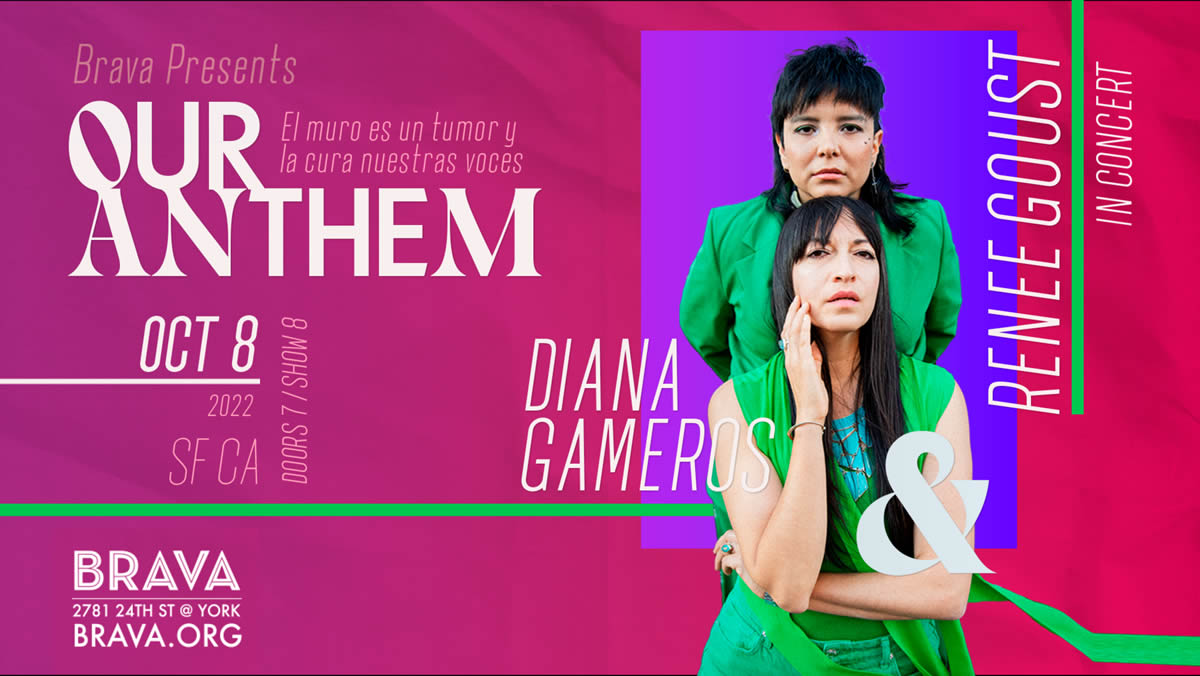 One night of musical reflections on immigration, love and identity.

*Masks are required at all times.

United by their cultural backgrounds and experiences, Diana and Renee will take the stage to perform original work and songs of the Latin American tradition. Through song, stories, and visual projections they will embark on a journey that celebrates diversity, identity, their connection to the homeland and the shared yearnings of the heart where humanity finds common ground. Reflective, nostalgic, and festive, “Our Anthem” will highlight the hopes and joys that uplift us even in trying times.

Mexican-American singer-songwriter Renee Goust (she/they), who was raised on the US-Mexico border, writes songs about the fight for gender equality, LGBTQIA+ experiences, and other social justice issues.

In doing so, she seeks to champion identities that have been historically underrepresented in the musical traditions of the Americas. Her songs “La cumbia feminazi” and “Querida muerte (No nos maten)” have become part of the vibrant soundtrack of the feminist struggles in the streets of Latin America. Renee has performed at renowned venues such as Lincoln Center, New York’s Guggenheim Museum, and Mexico City’s El Cantoral, to name a few. She has been featured on outlets such as Billboard, NPR’s Latino USA and Spain’s El País. Renee Goust has composed original music for short films produced by Disney & WeTransfer. She is part of the organizing committee for Marcha Lencha CDMX, the first trans-inclusive lesbian march in all of Mexico, and is the founder and curator of @RuidoPrieto, a social media outlet that focuses on showcasing the work of independent black and brown musicians. She has collaborated with The United Nations Population Fund (UNFPA), New York’s Women’s Strike, ExpoDiversidad in Chile, and Queer Pride Marches in New York City, Mexico City, and La Paz, Bolivia, among others. Renee was a guest panelist at Guadalajara’s FIMPRO 2021 (International Music Fair for Professionals), where she spoke about LGBTQIA+ diversity and inclusion in the music industry. She was selected as a US Cultural Ambassador for American Music Abroad’s 2021 – 2022 cycle.

Originally from Ciudad Juarez, Mexico, Diana Gameros has lived and worked in the Bay Area as a singer, songwriter, composer, music instructor and cultural worker for almost 15 years.

As an artist at the borderlands between cultures, languages, and genres, Diana’s mission is to use music as a platform to bring light to her Mexican and Latino heritage and to expand the conversation around social justice issues especially those involving the immigrant community. As a formerly undocumented immigrant, Gameros’ music often tells stories of family, migration, and home, and has led her to perform with other prominent performers such as Joan Baez, Taylor Mac, Natalia Lafourcade, and the San Francisco Symphony. Gameros has performed and spoken at rallies, caravans, protests, vigils, universities, county jails, juvenile halls, detention centers, hospitals, city halls, and at events for non-profit organizations committed to promote justice. In 2013 she released her first album “Eterno Retorno”, a soulful retrospective of her journey as an immigrant, and in 2014 she received the Emerging Leader Award from the Chicana/Latina Foundation for her work in music and social justice activism. Gameros was named one of YBCA’s 100 Artists in 2015, for asking the questions and making the provocations that are shaping the future of American culture. In 2017 Gameros released “Arrullo”, an album of classic Mexican songs arranged and produced to pay homage to her heritage and homeland. Her songs and story have been featured on NPR, Billboard, Mother Jones, and the PBS Newshour, among others.

One night of musical reflections on immigration, love and identity.